by Janice McDonald
NEXT PAGE 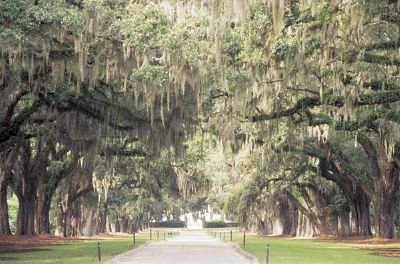 Charleston is where the Ashley and the Cooper Rivers come together and form the Atlantic Ocean, or so that's what the locals say. Charlestonians know this Southern city is special, and it doesn't take long for visitors to recognize that as well. Founded in 1670, Charleston is one of the oldest cities in the United States and the heart of what is called the South Carolina Low Country -- coastal lands that include marshes and barrier islands.

There's an air of civility and privilege that almost drips from the Spanish moss on the oak trees. Exquisitely preserved architecture in an extraordinary setting and exuding Southern charm and grace, the genteel town is as much about its people as it is about history and the sights to see. Complete strangers will smile and say hello and, more than likely, they can recite their entire pedigree, because Charlestonians take as much pride in their own history as they do their city's. You will know you are in a unique place from the minute you arrive on "The Peninsula."

The Best of Charleston

From the slow southern drawl of the residents to the laidback atmosphere, there's nothing about Charleston that's in a hurry. Residents hold fast to tradition and rushing anyone just wouldn't be polite.

Its reputation for civility dates back more than 300 years when King Charles II of England first named this port Charles Towne. Evidence of the city's importance in the early development of the United States is seen throughout the historic district and, while Charleston's role has diminished over the centuries, its beauty hasn't faded.

Through wars, hurricanes, and yes, even an earthquake in 1886, it's amazing just how much of the architecture has been preserved. Cobble-stoned streets in some neighborhoods only add to the ambience. The tip of the peninsula is fortified with a seawall called the Battery, which overlooks the harbor and the island of Fort Sumter, where the Civil War began. The Battery -- its surrounding homes and colorful buildings known as Rainbow Row -- and the Old City Market have become symbols of not just Charleston, but the South in general.

While the city identifies best with its historic areas, there's far more to see and do. The South Carolina Aquarium and numerous gardens, marinas, and plantations are just some, to name a few. For those willing to venture across a bridge or two to the coastal communities or islands, you'll find beautiful beaches to explore.

Charleston is also home to the internationally acclaimed Spoleto Festival, which highlights all forms of the arts, including opera, classical music, and dance.

Geography and landscape: The coastal lands of South Carolina are called the Low Country because for as far as the eye can see, the terrain is completely flat. Charleston itself is on a peninsula facing south to a large harbor that leads to the Atlantic Ocean. Flanked to the south by the Ashley River and the Cooper River to the north, there's marshland all around and many of its suburbs and neighboring towns are actually on barrier islands.

The Cooper River is the wider of the two rivers and the home to Charleston's port. You can get a good view of the river as you take the 2.7-mile journey cross it on the new Arthur Ravenel Bridge to the town of Mount Pleasant. The mouth of the harbor is very wide, and if you face southeast, you can see the island of Fort Sumter and the Atlantic Ocean in the distance. Sullivan's Islands are at the northern end of the mouth of the harbor and James Island is to the south.

South Carolina is called the Palmetto State because the entire landscape is dotted with palmetto trees and stately oak trees draped in Spanish moss.

General orientation: If you keep in mind that you're on a peninsula, it's relatively difficult to get lost for long in Charleston. The peninsula points directly south from the inland areas and almost every direction is given in relation to the Cooper River to the east, the Ashley River to the west, or The Battery, which is the southern tip of town overlooking the harbor. The main travel artery from any place inland, including the Charleston Airport, is Interstate 26, which dead-ends at the main coastal road, Highway 17.

Highway 17 works its way along the entire South Carolina coast and crosses the Cooper River, the Charleston Peninsula, then the Ashley River and into Charleston's western suburbs (often referred to as "west of the Ashley). On the peninsula itself, Highway 17 is almost a dividing line for the inland suburbs and the Historic District, which lies directly south of it.

With the exception of East Bay Street, which skirts the eastern edge of the city, Charleston streets are on a grid system and because most of them are narrow, you'll run into a lot of one-way streets, especially as you get closer to The Battery.

©2006 Charleston CVB The Battery in Charleston is a seawall that overlooks the island of Fort Sumter, where the Civil War began.

Safety: Charlestonians take great care to make sure their visitors are safe and protected, just like residents of other major cities. That said, a city this old has some neighborhoods that aren't as updated or maintained as others. Some of these neighborhoods are located directly on either side of Highway 17 and you may have to drive through them to get to Charleston's Historic District area. It's best to drive rather than walk through them.

As with any tourism location, there are people who prey on tourists, but luckily those incidents are rare. Still, it's always best to exercise caution no matter where you are in the city.

Population : Almost 107,000 people live in Charleston proper, but three counties; Charleston, Dorchester, and Berkeley; come together in the area and most residents of these counties consider themselves Charlestonians. If you consider that point of view, then the true population of the Charleston area is closer to 600,000 people.

Climate/weather: You can't escape the coastal location and the humidity that comes with visiting Charleston. While summer temperatures are usually in the upper 80s or low 90s, it can feel much hotter because of the high humidity. Luckily, coastal breezes come into play and you'll fair better in Charleston than you would inland.

The area is legendary for its summer thunderstorms, which seem to pop up out of nowhere in the late afternoon, drench the city, then disappear. Although rare, hurricanes also have targeted the town, most notably, Hurricane Hugo in 1989.

Fall temperatures stay warm until late November. Winters are usually relatively mild with temperatures averaging in the 50s and it rarely gets below freezing. January's average temperature is 35 degrees Fahrenheit, but it's a damp cold, so you could find yourself bundling up a bit more to keep the chill out of your bones. Spring shows up in March, but doesn't last long as the mercury starts edging up rapidly, with the average temperature in July about 75.9 degrees Fahrenheit.

Summer may be a favorite time for visitors, but to avoid the heat and crowds and enjoy the colorful azaleas, the best time to visit Charleston is late March or early April.

Charleston is a great city to explore by bike or foot, partially because the geography is so flat. However, there are plenty of other ways to navigate the city. Keep reading to learn more about how to get around Charleston.