Can you cook a meal on your car's engine?

Browse the article Can you cook a meal on your car's engine? 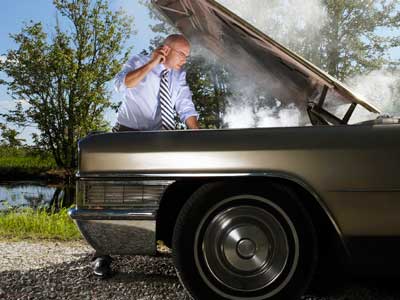 Let's say you're ­road tripping your way across America. One particularly flat st­ate offers unending views of th­e horizon, and not one fast-food sign is in sight. No worries. Just throw some grub on the car engine, and by the time you cross the state line, you've got dinner.

Cooking on your car's engine may not be the most efficient or economical way to cook if you're just hanging out at home. You have to get on the road to heat up the engine, and who wants to waste the gas money? But if you're driving a long distance anyway, cooking on your engine provides a quirky culinary challenge. Some foods are easier to prepare on your car engine than others, but nearly any food can be heated up to a tasty meal.

Engines often don't seem like particularly clean surfaces, which is why some people find the idea of using one as an oven unappetizing. But if your engine is in go­od working order and you wrap your meal thoroughly in aluminum foil, no one should ever suspect it was prepared under the hood.

­Engines generate a great deal of heat, and capturi­ng that heat to use for cooking is a relatively straightforward process. Any engine that's in good repair is suitable for cooking. If your car has exhaust system problems, the exhaust fumes may remain in the engine area. While it won't affect your health to eat food prepared on such an engine (unless you cook this way on a regular basis), it might affect the flavor. Exhaust problems aren't good for your car or the environment anyway, so you might as well have those issues repaired.

With your car in good working order and your stomach rumbling, you're ready to cook. But how? 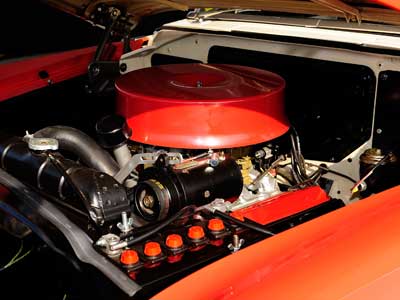 A nice place to braise some chicken
Rusty Jarrett/Getty Images

The premise behind e­ngine block cooking is that you use the heat of the engine to cook food. This means that the engine must be hot, so you'll need to keep the car running the entire time the food is cooking. The speed you're driving while your food's on the engine doesn't matter that much. But many car cooking recipes call for dishes to be cooked for a certain number of miles (kilometers) rather than a certain amount of time. So if you hit traffic or you're driving a curving, one lane road, your food may be done before you've driven as far as the recipe calls for.

The first step in car cooking is to prepare the uncooked food. Lay the food on a piece of foil. Bring the two opposite sides of the foil up to meet in the middle and fold over several times. Then bring the other two sides up to the top of the package, and again fold the foil over several times. You should have a very neat, well-sealed package. Now repeat that process again with a second sheet of aluminum foil. Use at least two layers of foil to prepare your food package -- three is even better.

­Now you're ready to set the package on your engine. It helps to know what part of the engine produces the most heat. Any plastic area on your car's engine won't get hot enough for cooking. You need to stick with the metal areas. The exhaust manifold is usually a good choice, assuming you can easily access it. To determine what other areas make good cooking spots, take your car for a spin around the block. When you get back in your driveway, turn off the engine and pop the hood. Quickly touch any flat metal areas of the engine to see how hot they are. Or, if you're afraid you'll burn your finger, drizzle a few drops of water on different areas of the engine. If the water jumps and sizzles, the area is hot enough for cooking.

You have your meal packaged and you've decided where to place it on the engine. But how do you make sure you don't lose your dinner on the highway?

The George Foreman of Car Engines

Does one car cook better than another? It's doubtful anyone would choose a vehicle based on it's grilling abilities. Nevertheless, it's an interesting question. Any car engine gets hot enough for cooking. Older models, however, tend to run hotter. Newer models are more efficient and run cooler, so they need a little more time to get the job done.

Cooking on Your Car Engine

If you don't want your meal to hit the highway, you need to put it in a secure spot. You ­can always tie your foil package to the engine. But placing it in a snug location in the first place will keep it from shifting around, becoming lodged in the engine or falling to the road below.

­Experienced car engine cookers recommend a process called the foil test or foil cone test to help you place your meal. To complete this test, take a large piece of aluminum foil and form a ball or a cone around 8 inches (20 centimeters) high. Place it on the engine where you plan to put the meal and shut your car's hood. Open the hood up and see how much of the foil has been crushed. If the hood didn't touch the foil at all, your food package needs to be thicker than the cone to prevent it from sliding around. You can add more foil layers to your package or make some balls with aluminum foil to fill the space between the top of your package and the inside of the car's hood. If the foil was barely crushed, then your package should be about that thick. The pressure of the hood pressing down on the package will help to keep it in place. If your foil is severely crushed when you open the hood, your package needs to be thinner than the foil, or your meal will look like the crumpled foil.

Even if you're sure your food package is snug, you may want to secure it with a piece of wire. Use common sense when doing this. Use a lightweight wire and never secure the wire to a part of the engine that moves. Once you're confident the package will stay put, hit the road.

Are We There Yet?

Car cooking provides a new question for the road weary traveler. Instead of, "Are we there yet?" you may hear your traveling companions whine, "Is it done yet?" It takes trial and error to determine exactly how long it will take to cook various foods, and it never hurts to stop a little early to check on your package. But here are some general guidelines: Assuming you're driving 65 mph (104 kph), chicken breasts should be ready after 60 miles (96.5 kilometers). Sliced potatoes should be done after 55 miles (88.5 kilometers). And, if you just have a short trip ahead of you, shrimp will be ready to eat after 30 miles (48 kilometers) of driving.

The Hazards of Engine Cooking

It may seem like you're risking damage to your health or your car's health by cooking on your engine. But as long as you take some basic precautions, the process is harmless. For example, when you place your food package on the engine, there are some places you should avoid. Set the package away from any moving parts. In particular, stay away from the area where the gas pedal connects with either the fuel injection system or carburetor (depending on the age and model of your car). Placing a package here could prevent you from starting the engine, or worse, prevent you from being able to stop it.

­Don't use hoses or belts to secure a package. While common sense may tell you to steer clear of the belts, the hoses are easily pulled loose. They don't have a great deal of slack in them. If you push a food package under a hose, it may not cause harm initially but could cause the hose to come loose while you're driving. Look at what's around the package when you place it. You don't want to block airflow to the engine or pull any wires loose.

You shouldn't try to cook stews or other liquid meals on your engine. No matter how well your meal is packaged, the vibrating engine will splatter juices and this may create smoke. In fact, a particularly fatty liquid, like the juice from cooking meat or oil, can cause a fire. Any food that roasts or braises should come out well on your car engine. Chicken, cuts of beef and potatoes are all good choices.

Remember -- safety first. Before you place your food package on the engine, turn your car off. Same deal when you remove the package. Even if you stop for a quick check to see how your meal is progressing, turn the engine off before opening the hood.

Otherwise, if your cuisine is done, set up a little picnic on the side of the road and enjoy.

You should never leave your children or pets inside a car on a hot day. But cookie dough -- have at it. When it's more than 90 degrees Fahrenheit (32 degrees Celsius) outside, a car's dashboard can quickly heat up to 200 degrees Fahrenheit (93 degrees Celsius). Set a cookie sheet with cookie dough on the dashboard while you run some errands, and when you return -- mmm, dessert.