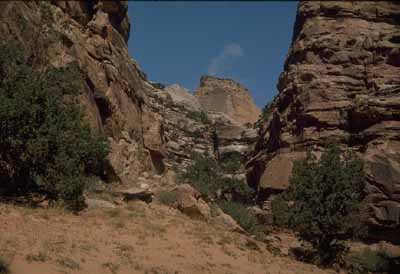 ©2006 National Park Services The canyons of Capitol Reef National Park were formed by the same natural forces that shaped the arches in Canyonlands and Arches national parks.

Capitol Reef National Park is in such a remote corner of the Colorado Plateau that the nearest traffic light is about 80 miles away. But for centuries, Capitol Reef has been known as a place of dramatic beauty that has drawn visitors to gaze at its wonders or reap its bounty. Ancient petroglyphs, often figures of bighorn sheep and other animals, were cut into rock walls by people who inhabited this area more than 700 years ago.

The people who carved these figures, known as the Fremont people, once plowed fields in the central area of today's park, where towering cliffs contrast with a green oasis along the Fremont River. The Fremont people were a Puebloid group who hunted and gathered for sustenance. Archaeololgists have recovered artifacts distinct to the Fremont, including pottery and unique clay figurines that closely resemble the pictographs and petroglyphs found in the park today.

In the 19th century, Mormon pioneers settled in the high plateau lands to the west of Capitol Reef. One community took root at the junction of the Fremont River and Sulphur Creek. Originally called Junction, the settlement became known as Fruita after its inhabitants farmed and planted orchards in the valley. The prodigy of the Mormons' farming can be seen today in the apple, pear, peach, apricot, cherry, plum, and mulberry trees that still flourish. The one-room schoolhouse that visitors can tour was established by the Fruita settlement in 1896 to serve as a community center as well as an educational building.

The last residents left in the early 1960s, but current visitors can still reap the benefits of the previous community's diligence, such as when the Fruita orchard blossoms with a myriad of fruit in the spring. As each fruit ripens, park visitors are allowed to partake on a pick-your-own basis. That's just one reason to make the journey to this magnificent slickrock park.