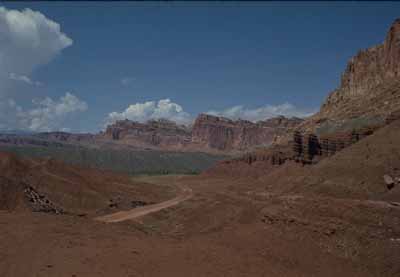 ©2006 National Park Services An old wagon trail called the Blue Dugway winds through the park along a scenic, 25-mile route.

Over the centuries, the exposed edges of the uplift have eroded into a slickrock wilderness that encompasses most of Capitol Reef National Park's scenic splendors. Layer upon layer of brightly colored sandstone is cut by deep, serpentine canyons or eroded into natural bridges or massive domes. One of these great monolithic rock structures apparently reminded an early traveler of the capitol dome in Washington, D.C., and he came up with the name Capitol Reef.

One of the most wonderful parts of the canyon is along the Fremont River. In this deep-cut passage, the early Mormons settled and planted extensive groves of fruit trees, including apple and peach. The park headquarters and visitor center are found here, along with a fine campground.

At sunrise and sunset scattered bands of mule deer are often seen feeding in this area, as well as the occasional coyote and gray fox. Sometimes lucky park visitors encounter a herd of desert bighorn sheep. The last sighting of a native bighorn was in 1948, and park officials believe that they disappeared because of diseases caught from domestic sheep. The park has since reintroduced the desert bighorn.

Another marvelous area is located in Cathedral Valley to the north of the Fremont River Canyon. In fact, Ansel Adams took one of his most memorable photographs (of the Temple of the Sun rock formation) at this site. The lovely Cathedral Valley reveals eroded spires of Entrada sandstone that rise 50 stories from the valley floor.

In the valley, a narrow four-wheel-drive road loops among stark and bizarre formations with such names as the Gypsum Sinkhole, the Walls of Jericho, and the Temple of the Sun. Elsewhere the pioneers descriptively dubbed the terrain Poverty Flat, Fern's Nipple, Tarantula Mesa, and Dogwater Creek.

Capitol Reef's lovely, 25-mile-long scenic drive leads into the heart of the park along an old wagon trail called the Blue Dugway. Legend has it that this road has been used by Native Americans, outlaws, miners, and gypsies. It is said that the Devil himself was once spotted strolling on the trail. A pioneer farmer supposedly drove him away with the Book of Mormon. Today the Blue Dugway is graded and covered. It connects the former Mormon community of Fruita with the section of the Waterpocket Fold called Capitol Reef.

The backcountry of Capitol Reef National Park is a rugged realm, and careful preparations should be made before undertaking any major trips. Most importantly, sufficient water must be taken in this vast desert region.

You'll find dozens of picturesque vistas as you hike along the Fremont River and through Cathedral Valley. Here are some suggestions for other unforgettable sights:

This rugged region of southern Utah has been home to various inhabitants, including the Fremont people and early Mormon settlers. To read more about the early Capitol Reef dwellers, turn to the next page.