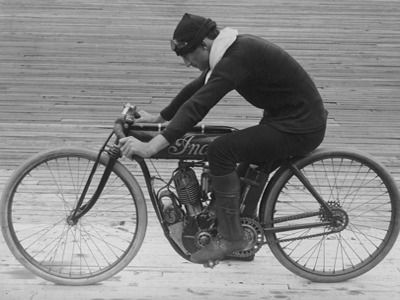 Erwin "Cannon Ball" Baker road across the United States in 1914 on an Indian motorcycle much like this one.
Paul Thompson/FPG/Stringer/Getty Images

The Cannonball Run didn't originally start out as a race. In 1971, there was a looming change on the horizon -- the institution of a nationwide maximum speed limit of 55 miles per hour on American interstates. Automotive journalist Brock Yates had a problem with the impending law and set out across country in a Dodge van to try to prove a point that high-speed travel across the United States by car was possible. He was quoted as saying, "Good drivers in good automobiles could employ the American interstate system the same way that Germans were using their Autobahn." Germany was and still is known for its famous high-speed highway system that has no imposed speed limit.

Yates and a crew of three men drove 2,858 miles (4,599 km) from New York to Los Angeles in the Dodge van in 40 hours, 51 minutes at an average speed of 70 miles per hour (112.6 kph). At the end of the run, Yates thought it might be a good idea to do it again and compete with other drivers, and The Cannonball Run was born. The full name of the race was the "Cannonball Baker Sea-to-Shining Sea Memorial Trophy Dash." Many people referred to it as the "Cannonball Dash," and it has since become most familiar, due in large part to the movie, as "The Cannonball Run."

The race was named for race car driver Erwin G. "Cannon Ball" Baker. Baker was famous for making more than 140 drives across the United States, starting way back in 1914. That trip was on an Indian motorcycle and took a whopping 14 days. Baker would later become the first commissioner of NASCAR and is an inductee in the Motorcycle Hall of Fame. Because of his fame for making trips from New York to California and Canada to Mexico, Yates wanted to pay homage to the racing legend. Even though Baker passed away in 1960, Yates was advised to change "Cannon Ball" to "Cannonball" in order to avoid any legal complications.