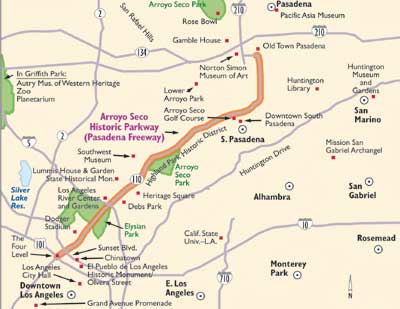 Dedicated on December 30, 1940, the Arroyo Seco Parkway (also called the Pasadena Freeway or California State Route 110) connects Los Angeles and Pasadena through the historic Arts and Crafts landscape of the Arroyo Seco. The studios and workshops of these turn-of-the-19th-century artists and crafters dotted the banks of this intermittent river.

Today, the area's natural and built environment form a seamless cultural landscape, strongly associated with the Arts and Crafts era, that continues to inspire generations.

Conceived in the parkway tradition with its gentle curves, lush landscape, and scenic vistas, the parkway also incorporated modern elements that laid the groundwork for the California freeway system.

Combining ideas reminiscent of the older parkway tradition with those of modern freeway design, the Arroyo Seco Parkway was the first divided-lane, high-speed, limited-access road in the urban western United States. The parkway was envisioned both as a scenic pleasure road traversing the Arroyo Seco and as a vital traffic conduit linking the expanding cities of Pasadena and Los Angeles.

Considerations: Oversize vehicles are prohibited on the byway. Instead of continuous shoulders, the highway has intermittent "turn-out pockets" for disabled vehicles.

Highlights of the Arroyo Seco Parkway

While there's much to appreciate on the drive along the parkway itself, much of the richness of the Arroyo Seco culture is to be found among the historic houses, museums, and outdoor recreational areas found just beyond its exits. Here are the highlights of Arroyo Seco Parkway:

the banks of this intermittent river.

El Pueblo de Los Angeles Historic Monument: The parkway's southern end is in downtown Los Angeles. Before starting your drive, take time to explore El Pueblo de Los Angeles Historic Monument, where the city was born in 1781. Among the more than two dozen historic adobes and other structures is the oldest surviving house in Los Angeles. Don't miss Olvera Street, a festive pedestrian-only Hispanic marketplace and dining area. Nearby is Chinatown, another fascinating ethnic neighborhood to explore.

©Byways.org Once you enter Elysian Park, you'll find a plethora of activities.

: When reaching Pasadena, you'll have your choice of several outstanding attractions to tour. Old Town Pasadena, the historic core of the city, is located on Colorado Boulevard between Pasadena Avenue and the Arroyo Parkway. The Gamble House on Westmoreland Place is a landmark example of the Craftsman architectural style and is open for tours.

Things to Do Along the Arroyo Seco Parkway

While located in the second largest city in the United States, the Arroyo Seco Parkway is an urban oasis with natural areas, diverse parklands, and views of the Angeles National Forest in the snow-peaked San Gabriel Mountains to the north. Arroyo Seco, Spanish for "dry stream," is geographically the most prominent feature of the northeastern Los Angeles landscape.

The great, long canyon of the Arroyo Seco extends from the foot of the San Gabriel Mountains north of Pasadena, southward along the western edge of South Pasadena. The canyon then continues south through Highland Park until it joins the Los Angeles River not far from Elysian Park.

The Arroyo Seco Parkway is brimming with recreational activities. In the 1920s, under the urging of Charles Lummis Pasadena and Los Angeles recognized the opportunities of the Arroyo Seco to provide recreational access to a growing metropolitan area. Active recreation -- such as hiking, swimming, horseback riding, bicycling, fishing, tennis, and golf -- is matched by more passive pursuits like bird-watching, painting, and stargazing.

The Arroyo Seco lies in the heart of Los Angeles, a recreational melting pot. The byway itself features Dodger Stadium, allowing you to partake of America's favorite pastime. For golfers, courses are abundant in the area, including Arroyo Seco's own course. Downtown Los Angeles, only a block from the byway, has days' worth of activities, from basketball or exhibits at the Staples Center to provocative contemplation at the Museum of Contemporary Art.

The History of the Arroyo Seco Parkway

The Arroyo Seco Parkway was the prototype of the world-famous Los Angeles freeway system. Its significance in California's highway history is highlighted by its designation as an American Civil Engineering Landmark.

The Arroyo Seco Historic Parkway is also California's first and only state historic parkway and is nationally recognized as one of the most significant roadways of the 20th century.

The megalopolis of Los Angeles actually began as just a small settlement of a colony of settlers from Mexico. The Arroyo Seco Historic Parkway lies nearly adjacent to that original settlement, El Pueblo del Nuestra Signora, La Rena de Los Angeles. The site contains more than 20 historic buildings, many of which can be viewed or are now museums.

If it's culture you desire, you'll find plenty of it on your scenic drive along the Arroyo Seco Parkway. The Arroyo Seco was the center for the Arts and Crafts movement on the West Coast and is one of four internationally recognized centers of the movement in America.

The Arts and Crafts movement started in the United Kingdom between the late 1850s and early 1860s and was characterized by a disregard for industrialization. Followers of the movement built their own houses out of as many natural materials as possible and handcrafted as much of their environment as possible.

By the late 1890s, the movement had worked its way to America, having significant influence on the Arroyo culture throughout the first two decades of the 20th century. The movement gave rise to thriving enterprises, including furniture design and manufacturing, home plans and kits, ceramics, glasswork, metalwork, and textiles.

The influence of the Arts and Crafts movement on the Arroyo Seco culture is most evident in the architecture of many of the structures along the byway. Bungalows along the byway are built of all-natural materials and feature wide porches and long roof overhangs. Additionally, almost all of the buildings feature native Arroyo cobblestone trim, collected from the river of the valley.

If you choose to include an overnight stay in your trip along the Arroyo Seco Parkway, Mobil Travel Guide recommends the following conveniently located lodgings: