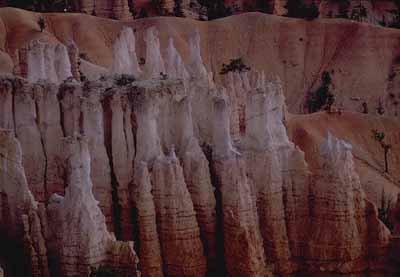 Hoodoos. That's the word used to describe the eerie orange and red pinnacle formations of eroded sandstone that make Bryce Canyon National Park famous around the world. Each year one million or so pilgrims journey to Bryce Canyon, located in southwestern Utah. Many visitors arrive from nearby Las Vegas, where direct flights to the Bryce Canyon Airport make the trip especially convenient. Visitors can enjoy hiking and horseback riding, as well as unique nighttime programs such as moonlit walks.

Nowhere else in the world can you see so many oddly shaped and brightly colored rock pillars. The distinctive hoodoos are scattered over the countryside in sharp warriorlike ridges, solitary hermit spires, or closely clustered familial groups. From the coliseumlike overlooks, commanding vistas can be had of the remarkable eroded landscape that makes up the scenery in Bryce Canyon National Park.

The canyon's colorful glory is enhanced by the changing seasons. In fact, many visitors choose to explore the park in the winter by cross-country skiing. On the following page, you will find tips on planning a trip to this beautiful Utah destination. 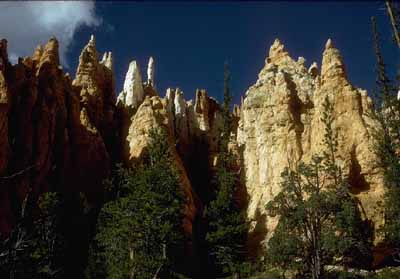 History: How Bryce Canyon Was Formed 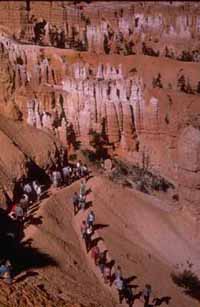 The Bryce escarpment, with its thousands of geological gargoyles and castellated spires, is the product of the relentless destructive powers of water and time. Under the onslaught of weather, nothing at Bryce Canyon National Park remains the same for long. The canyon is one of the best places on the planet to observe the forces that shape the surface of the earth.

A single summer cloudburst can carry off thousands of tons of gravel, sand, and silt to the Paria River and then on to the Colorado River and into the Grand Canyon. Bryce is changing at a fantastic rate: Its rim is receding one foot every 65 years. The place is an open textbook of geology.

Sixty million years ago, a vast body of water, which we refer to today as Lake Flagstaff, covered southwestern Utah. As the ages passed, sediments of gravel, sand, and mud accumulated to thicknesses of 2,000 feet or more beneath the sea. Eventually, cemented together by minerals and pressure, the sediments turned into solid rock, which is now called the Wasatch Formation.

Beginning about 16 million years ago, colossal movements of the earth's crust forced the formation upward. This stress produced great breaks in the rock. One of these chunks is the Paunsaugunt Plateau. The fracturing of the rock on the eastern side of the plateau, where Bryce is situated, left it particularly vulnerable to the forces of weather, especially to the slow, steady power of water.

These powerful erosive forces are most on display in late winter and early spring. As the ground thaws on warm days, you can hear the grinding, groaning, and grumbling of erosion at work. Water runs down crevices, rocks tumble, and gravel and pebbles shake loose from the sides of the canyon's weird formations.

©2006 National Park Services Bryce Canyon is a series of ampitheaters eroded out of Paunsaugunt Plateau.

In Bryce, the endless power of erosion has sculptured thousands of the limestone hoodoos. Derived from the word "voodoo," the term means "bad luck," but in Bryce Canyon, hoodoo invokes only the benevolent magic of wondrous shapes and colors.

The stunning terra-cotta, yellow, pink, and mauve of the canyon's rock formations result from oxidized chemicals in the stone: Red and yellow come from iron; blue and purple, from manganese. Light also affects the colors of the formations in Bryce. The colors change throughout the day, moving from the blue end of the spectrum in the morning light toward red hues at sunset.

The kaleidescope of colors of Bryce Canyon have amazed travelers for hundreds of years. Today, its geological marvels make the park a perfect destination for sightseers and explorers from around the world.