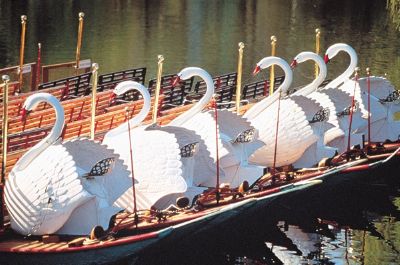 ©2006 istockphotos.com The Swan Boats, seen here docked in the lake of The Boston Public Garden, offer visitors a relaxing, scenic tour in a unique setting.

Periods of sightseeing should be tempered with down time. Hands down, the Boston Common and the Boston Public Garden are the places to relax in the city. Together, these practically adjoining parks are Boston's great public space. Here, you can sit on the park benches and people-watch, walk along the paths, and enjoy nature, whatever the season.

Take advantage of Boston's waterfront setting. Spending time on and near the water is another favorite way for Bostonians to relax. Enjoy a Swan boat ride, a harbor cruise, or perhaps a leisurely walk along the Charles River Esplanade.

Insider's Guide: The Best of Relaxing & Unwinding in Boston

Insider's Guide: The Best of Relaxing & Unwinding in Boston

How about hanging out at a glamorous rooftop pool in Boston? Who would have thought! The roof top pool, a.k.a. RTP, at the Mobil Three-Star Colonnade Hotel (120 Huntington Ave) is open to the public (for a fee) Monday through Friday during the summer season. Swim, relax by the pool with a book, and have a mojito. RTP is the stylish summer spot for Boston's see-and-be-seen crowd.

A sunset stroll along the Charles River, over the little lagoons and footbridges of the Charles River Esplanade along Storrow Drive, is romantic. You can catch a free summer concert at the nearby Hatch Shell, an outdoor stage. Best access can be made if you come from the Arthur Fiedler footbridge at Beacon and Arlington Street.

Christopher Columbus Waterfront Park (Atlantic Ave, near Long Wharf) has some of the best views of Boston Harbor. Recently renovated, the park has a small rose garden, playground, fountain, and benches. Located near the North End and Fanueil Hall, the park is a perfect spot to relax after a day of shopping and dining in the area.

Best spots in Boston for people-watching? For "beautiful people," the cafes on Newbury Street can't be beat. The people-watching is great at Faneuil Hall simply for the sheer number of residents and visitors who pass through each day.

Perhaps one of the best places to sit on a blanket and watch the beauty, and crowds go by, at Boston Public Garden (64 Arlington St), which has 24 acres of flowers and ornamental shrubs that bloom from April until mid-October.

What better way to relax and unwind than spending a day on the links? The Franklin Park Golf Course (1 Circuit Drive, Dorchester) is a 6,009-yard, par-70 golf course with some demanding, steep hills. This is especially worth playing since it's the second oldest public golf course in the United States.

Perhaps you want a guide to show you the highlights of Boston. Try a guided tour on an amphibious landing vehicle (or "Duck"), where you'll peruse the streets of Boston before plunging into the Charles River for breathtaking views of the city's skyline. In the next section, learn about the various organized tours offered in Boston.