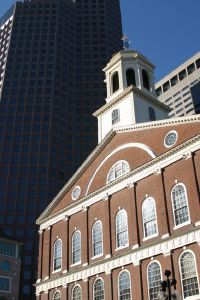 The shopping scene in Boston caters to all kinds of shoppers. With haute couture and one-of-a-kind, upscale establishments, fashionable Newbury Street is a mecca for both the wealthy and hip trendsetters. Cambridge has scads of independent booksellers, and Inman Square is the place for the trend-setters. For the most seriously addicted shopaholics, there is bustling Faneuil Hall and the behemoth Copley Place/Prudential complex.  And Filene's Basement is legendary and a tourist attraction in its own right.

Insider's Guide: The Best of Shopping in Boston

Descend the narrow escalator directly from the street into the depths of a century-old Boston retail institution. The sign proclaims "Entrance to World Famous Filene's Automatic Basement Store" (426 Washington St at Downtown Crossing). Old wooden bins and overstuffed clothing racks are packed with a mix of brand name, designer, and sometimes even couture goods. The dressing rooms are communal and not for the timid.

This is the real Filene's Basement, the flagship store, and is famous for its automatic markdown system. The price tags are dated and prices drop by 25 percent every two weeks. After four weeks, the price is reduced 75 percent off, and if the merchandise remains unsold it's given to charity. Filene's Basement is for serious shoppers who enjoy the thrill of the hunt and a chance to snag a men's Armani suit, a Prada evening gown, or Kate Spade shoes at a bargain price.

Shreve, Crump, and Low (330 Boylston St) is one of Boston's oldest retailers. Shreve's is a great place to buy high-end Boston-themed souvenirs such as a sterling silver Swan boat pin or a hand-painted enamel box of the USS Constitution, the oldest commissioned warship in the world and located in Boston.

Boston's raucous open-air produce market, Haymarket (Blackstone Street off of Interstate 93), is a colorful part of the Boston landscape. Fifty or so temporary wooden stalls are set up for business on Fridays and Saturdays from dawn to dusk, year-round on Blackstone Street, behind Quincy Market.

Haymarket still has a strong Italian presence, since it's on the edge of the North end, but many of its customers in recent years have included Latinos, Asians, and others. Those participants have helped Haymarket evolve in its offerings. Don't even think about picking your own apples; the vendors will yell at you, but it's all part of the market's charm and atmosphere.

If you're a book lover, stop in at Peter L. Stern (55 Temple Place) for its rare and antique books, including many first editions of 19th- and 20th-century literature. It's worth the trip to view antique books that remain intact after nearly 200 years.

Boston's nightlife may be tame compared to cities such as New York and Miami, but there is still plenty to do once the sun goes down. Find out about some of the best bets in nightlife and entertainment in the next section.