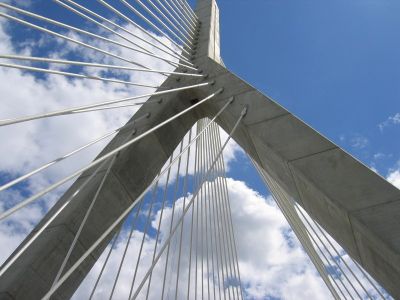 Boston has an extraordinary number of landmarks -- old and brand new. The USS Constitution, the Swan Boats, and Fenway Park are a few of the treasures that define Boston to residents and visitors alike. Tiny Beacon Hill is famous for its picturesque streetscapes and the architectural details of its Federal-style homes.

In Boston's Back Bay neighborhood, the brownstone homes and several of the buildings that cluster around Copley Square are interesting examples of Victorian-era architecture. What's next for Boston? The buzz in town is that the new Institute of Contemporary Art will be Boston's next major landmark.

The soaring cable bridge that spans the Charles River to the north of Boston was an instant Boston landmark. Opened in 2003 as part of the Central Artery Tunnel Project, The Leonard P. Zakim Bunker Hill Bridge -- or simply the Zakim -- is named after the late Lenny Zakim, a local civil rights activist. It's the widest cable-stayed bridge in the world and its two towers mimic the Bunker Hill monument across the river in Charlestown.

Boston is rich in landmarks celebrating the "footsteps" of colonial Boston's struggle for freedom and independence. You can't see it all at once, but some places are worth noting, especially if you have limited time. The Boston Massacre Monument (206 Washington St) is a special acknowledgement of the origin of the Revolution of 1770. Paul Revere House (19 North Square) is Boston's oldest building and includes authentic furnishings from the Revere family. Old North Church (193 Salem St) is the site of the oldest church in Boston, in which a church sexton hung two lanterns in the steeple to signal the British were coming.

Touring the Harrison Gray Otis House (141 Cambridge St) will give you a sampling of home architecture from 1796 to 1820. Architect Charles Bulfinch designed this home, which strongly influenced the Federal style architecture in New England. For a sample of early-Georgian architecture, take a stroll through the Isaac Royall House (15 George St), furnished with Queen Ann, Chippendale, and Hepplewhite furnishings. Another example of Georgian architecture is the Shirley-Eustis House (33 Shirley St), and is only one of four remaining in the country.

The first United States lighthouse is still operating. Boston Light, located on Little Brewster Island in Boston Harbor, is the only U.S. lighthouse that is still manned.  A Boston Light Tour includes a narrated boat ride to Little Brewster Island and a ranger-guided tour of the light tower. You can even climb the 76 stairs to the top (or not). Boston Light tours are available from June 15 to October 1st. Book ahead, as tours sell out well in advance.

The weather beacon on top of the "old" John Hancock (200 Berkeley St) serves a useful purpose to both residents and visitors. Check out the signal before heading out. The neon lights predict the local weather forecast. But to decipher the lights, you need to know the rhyme:

The Boston Public Garden (64 Arlington St) is the first botanical garden in the United States with its 24 acres of flowers and shrubs. It also was the setting for Robert McCloskey's Caldecott-award winning picture book, "Make Way for Ducklings." The endearing bronze sculptures of Mrs. Mallard, Jack, Kack, Lack, etc. all are near the Beacon and Charles Street entrance to the park.

Boston encompasses a wide range of choices for the enthusiastic shopper, including haute couture boutiques on Newbury Street and bargain-bin shopping at the original Filene's Basement. On the next page, you can read about the highlights of shopping in Boston.