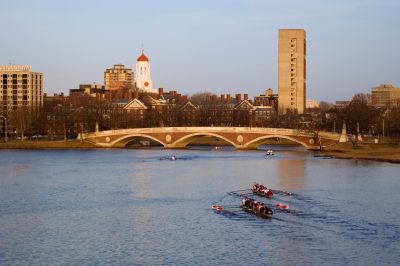 ©2006 istockphotos.com The Charles River in Cambridge is the site of the annual The Head Of The Charles Regatta, the world's largest two-day rowing event.

While Boston is one of America's oldest cities, conjuring up thoughts of colonial American history, keep in mind it isn't old-fashioned. The sites along the Freedom Trail may serve as a constant reminder of the city's rich heritage, but the area's highly educated student population gives the city a youthful dynamic.

While Boston Harbor brought trade and wealth to the city in Colonial times, today Boston's bustling waterfront is still the city's showpiece. There are a myriad of activities, such as restaurants, shopping, and attractions centered at Long Wharf. Boston's waterfront has recently expanded to include a new convention center and, soon, the new Institute of Contemporary Art. And throughout the year there are many world-class events going on in the city that make Boston the place to be.

Insider's Guide: The Best of Special Events & Attractions in Boston

Insider's Guide: The Best of Special Events & Attractions in Boston

The New England Aquarium (1 Central Wharf) houses more than 8,000 aquatic creatures, such as dolphins, penguins, harbor seals, and fish from around the world. It's worth visiting for its playful penguin pool as you enter the building, and for a four-story fish tank wrapped by a spiral viewing ramp. If you become tired of the small sharks and huge sea turtles, an Exploration Center is located on the first floor. You can also book a spot (April to October), on the Aquarium's Whale Watches Tour, an educational trip in which professionals take you 25 miles away to Stellwagen Bank to see the feeding grounds of various whales.

What's one way to pay homage to a good beer? Build a museum in its honor. The Boston Beer Museum (30 Germania St.) is an off-the-beaten-path attraction that will show you the critical details and behind-the-scenes of the brewing process. Brewing is a Boston tradition that goes back 200 years, and this building has the artifacts to prove it.

Go back to 1812 by stepping onto the decks of the USS Constitution (Charlestown Navy Yard). This is the oldest commissioned warship in the world and was engaged in a battle with the British about 600 miles off the coast of Boston. The ship was saved from the scrap yard in 1830 because of the public's response to an Oliver Wendell Holme's poem, "Old Ironsides." You can tour the vessel and learn more firsthand or visit its museum next door.

Seabiscuit was a championship horse that won many races in the 1930s, including a race at Suffolk Downs (111 Waldemar Ave). This race track is rich in history, and you can still visit to place pari-mutuel bets, which only involves placing a wager against other spectators instead of the house. All you need is a minimum of $2 to place a bet. On your way inside the clubhouse entrance, check out the bronze plaque commemorating Seabiscuit's history at Suffolk Downs.

Watch the Battle of Bunker Hill by visiting the Whites of Their Eyes at the Bunker Hill Pavilion (55 Constitution Rd, 617-241-7575). This specially designed pavilion houses a multimedia re-enactment of the Battle using life-size figurines and eyewitness narratives.

Against the backdrop of New England's autumn beauty, the Charles River Regatta, a world-class sporting event, is held during the third weekend in October. Hundreds of thousands of spectators line the banks of the Charles River in Cambridge to cheer on the athletes. The best vantage points are the six bridges that span the course.

Another world-class sporting event, the Boston Marathon, heralds spring for winter-weary New Englanders. On the third Monday in April, one million cheering spectators line the route from Hopkinton (in the western suburbs) to the finish line at Copley Square.

In the winter take a spin on the ice at the Boston Common Frog Pond Rink (617-635-2120). Ice skating in Boston, under the lights with a fresh blanket of snow, is magical. Frog Pond is open every day for public ice skating from late November to March. You can rent skates and buy hot chocolate from the Frog Pond concession stand.

For the visitor seeking cultural fare, Boston offers a world-class orchestra and ballet company, in addition to a number of important art museums. On the next page, read about Boston's thriving arts and culture scene.