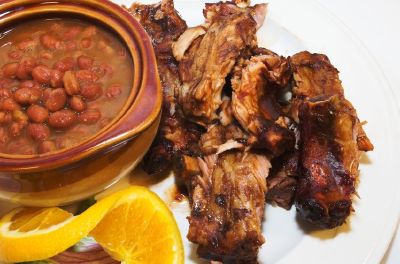 ©2006 istockphotos.com Once a favorite food for colonial Bostonians, Boston baked beans are still served at Durgin-Park.

Local New England cuisine emphasizes seafood. You absolutely have to try New England -- no tomatoes ever -- clam "chowda." Rich and creamy, clam chowder is New England's comfort food. For chowder with a side of history, the Mobil Two-Star Union Oyster House (41 Union St) is the oldest continually operating restaurant in the United States. And if you've never tasted lobster before, you're in for a treat. Lobster appears in some form on nearly every menu, such as traditional boiled lobster, grilled lobster, and even lobster fritters.

Legal's Seafoods (26 Park Plaice) serves the best in seafood in a newly renovated building in downtown Boston, and is the place that natives choose to dine. You also can order just the right wine with your meal since its state-of-the-art wine celler houses 11,000 bottles.

Jumbo Seafood (7 Hudson St, 617/542-2823) is one of the largest restaurants in Boston's Chinatown. The Jumbo Shrimp steamed with wine and fresh garlic is representative of Jumbo's fresh, clean cuisine.  But if your taste runs to the more exotic, Boston has a treasure trove of other cuisines to try as well, such as Persian, Cambodian, and even Malaysian.

Boston is affectionately known as "Beantown" because beans baked in molasses was a favorite colonial food. Mobil One-Star Durgin-Park (340 Faneuil Hall Marketplace) is one of only a few restaurants in town that still serves Boston baked beans. Durgin-Park serves traditional "Yankee" cooking, the waitresses are famously (yet selectively) boorish, and everyone eats at communal tables. Durgin-Park is yet another Boston institution that can help you find the true "local" experience.

If you're looking to eat Boston Cream Pie, you will be eating cake. This vanilla layer cake filled with custard and topped with a chocolate glaze was first created at Mobil Three-Star Parker's Restaurant in the Mobil Three-Star Omni Parker House Hotel (60 School St). Parker House rolls also were invented here. In fact, dining here will put you in one of the oldest dining rooms in Boston.

Of course, the North End does Italian cuisine exceedingly well and there are some great Asian restaurants in Chinatown. Mobil Three-Star Mamma Maria (3 North Square) gets raves all around for its gorgeous setting and wonderful food. This restaurant located in an early 19-century brick townhouse, is a good spot to get contemporary and specialty dishes. Their rabbit with pappardelle pasta is a standout.

Boston is also noted for its many fine-dining establishments. During March and August you can sample a three-course prix fixe lunch or dinner at some of Boston's most exclusive restaurants at reduced prices.

Before you step into a restaurant, keep in mind that a 15 percent gratuity tip is expected for good service.  It's advised that you check the bill to determine if a gratuity is already included. For larger parties, the average gratuity trend for restaurants is to add from 15 to 18 percent to the bill.

As you've read in the preceding sections, Boston is a town with countless things to do. But since most travelers have only a limited number of days to see the city, we've planned several specialized itineraries. Check them out in the following section.