Getting In, Getting Around Boston 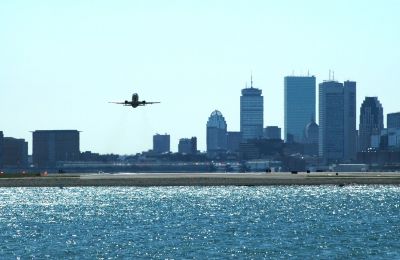 ©2006 istockphotos.com From Logan International Airport in East Boston, travelers can make their way to Boston by subway, bus, water ferry, or taxi.

Getting to Boston via car or plane is simple, but navigating the confusing streets of the city is a bit more complicated. On this page, we'll detail your transportation options for getting in and getting around Boston.

If you are flying into Boston, there are a variety of ways to get from Logan International Airport  to the city.

Car rental: Eight rental car companies are available at Logan. In Terminals C and E, all of the car companies have direct line telephone boards connecting to a local rental car facility. Each company has a complimentary shuttle bus that will stop curbside on the airport's arrival level to take passengers to the nearby rental office. Be aware that there always seems to be construction going on around Logan, so you will need to be careful and watch the signs directing you downtown.

Many travelers will use the free Massport shuttle bus service that runs between all airport terminals at the arrival levels, the airport subway station on the MBTA Blue Line, and the Water Transportation Terminal dock.

Another option is the MBTA Harbour Express, a water shuttle that makes a convenient 7-minute trip across the harbor from Logan to the city, and is a convenient option if you are staying at a Waterfront or Financial District hotel. Tickets are sold on the boat.

Taxi: You won't have difficulty finding a taxi at Logan, but make sure you understand the fee before you use one. All areas within a 12-mile radius of Boston are charged a metered rate of $2.25 to start and 30 cents per 1/8 mile after that. The charge becomes a flat fee beyond the 12-mile radius. Fares are based on one to four passengers per taxi. It's important to know that all taxis leaving Logan are charged a $2 airport fee.

The City Water Taxi operates 10 boats year-round that shuttle passengers from Logan to 15 landings in Boston Harbor. Don't worry if the weather is cold because the boats are fully covered and heated in winter. The standard rate is $10 per passenger for a one-way trip, $17 round trip, and children 12 and younger ride free with a paying adult.

Rush hour: Driving into Boston is relatively easy. Boston is the hub of New England and the region's highways link Boston to all points in the Northeast. If you are driving into or out of the city during morning or evening rush hours, driving in the breakdown lane, or shoulder, is allowed during posted hours on some highways. For visitors arriving by car, drive into Boston and park your car at your hotel. Expect to pay dearly for the privilege. Boston hotel parking fees are routinely $30 to $50 a night.

Rules of the road: Heavy vehicle and pedestrian traffic, non-existent parking, and a maze of narrow, one-way streets make driving in Boston difficult -- even for natives. You can buy a street map of Boston, but it probably won't do you any good.

Be aware the Central Artery Tunnel Project, or Big Dig, is Boston's massive highway and tunnel construction project still in the works. The project involves the Ted Williams Tunnel between south Boston and Logan airport, which is currently open to traffic, and the rebuilding of the Central Artery (Interstate 93), in which a new artery will be made underground through the heart of Boston and under the existing elevated structure.

The Big Dig schedule has work continuing through 2006, with ongoing construction detours and road closures. Avoid construction delays within Boston by walking or using public transportation instead.

Public transportation/fares: Boston's public transportation system of buses, subways, commuter rail, and ferries is operated by the Massachusetts Bay Transportation Authority, which is convenient, safe, and reasonably priced. There are four major subway lines, color-coded Green, Blue, Red, and Orange that cover downtown and the immediate suburbs. Most subway rides on the MBTA cost $1.25. Currently the MBTA is a token-operated system (1 token costs $1.25) that is phasing in a stored value card system. The Charlie card system minimum is $5, so most visitors will want to use the MBTA on a pay-as-you-go basis.

Taxis, on foot, or by bike: Taking a taxi is a necessary evil if you're coming from Logan airport with a lot of people or a lot of luggage. If you're out late at night, taxis may be your only option because the MBTA shuts down at 12:45 am, while Boston bars are open until 2 am. Taxis may be difficult to come by very late on weekend nights as hordes of college students leave Boston's nightclubs.

Boston is a relatively small city, and most of the sites are located within walking distance of each other. One of Boston's many nicknames is "America's Walking City" because walking really is the best way to get around. Boston's cobblestone streets are charming, but murder on your feet.  Wear study walking shoes or sneakers when touring on foot.

Now that you have an idea of how to get around Boston, let's explore some of Beantown's unique attractions. On the next page, learn about popular visitor destinations like Fenway Park, the Freedom Trail, and The New England Aquarium.