The History of the Black Canyon 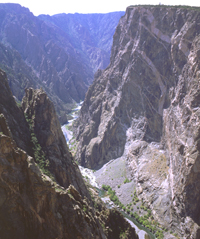 ©2006 National Park Services The Denver and Rio Grand Railroad offered passengers a unique perspective on the wonders of the Black Canyon.

Park travelers are often surprised to learn that narrow gauge rails once traversed miles of Black Canyon of the Gunnison National Park. Most of the former railroad is now submerged beneath the waters of Morrow Point Reservoir, although a short section of the railroad bed can be viewed from Pine Creek Trail. Passenger service on the line stopped almost 70 years ago, and freight service ground to a halt shortly thereafter.

General William Jackson Palmer's Denver and Rio Grande Railroad (D&RG) was the most successful to cross the Rocky Mountains. Palmer and his team first surveyed the area in 1881, and decided to built 15 miles of narrow gauge railroad along the Gunnison River.

Construction of the rail began immediately, with mostly Irish and Italian immigrant workers carving the railroad bed into the hard, steep rock wall, then laying tracks. Completed in summer of 1882, the line's inaugural run took place in August, and thrilled thousands of passengers.

The passage through Black Canyon was hailed by many as unusually scenic, and the D&RG extolled its virtues in their advertisements of the "Scenic Line of the World." However, train engineers were not as enthusiastic about the Black Canyon stretch, as rock falls and avalanches were common.

In 1889, renowned author Rudyard Kipling had this to say about his railroad trek through the Black Canyon: "We entered a gorge, remote from the sun, where the rocks were two thousand feet sheer, and where a rock splintered river roared and howled ten feet below a track which seemed to have been built on the simple principle of dropping miscellaneous dirt into the river and pinning a few rails a-top. There was a glory and a wonder and a mystery about the mad ride, which I felt keenly...until I had to offer prayers for the safety of the train."

The small community of Cimarron was established by railway workers at the far end of the line and continued to flourish even after the railroad extended farther west to Montrose. Cimarron slowly developed into a railroad town with a roundhouse and station facilities, and became known to train riders as a hospitable town.

Eventually, as railroad service declined due to a fall in mining activity and an increase in truck transportation, the town of Cimarron dwindled as well. Today, all evidence of the town that once stood is gone, but visitors can explore the abandoned Locomotive #278. This vestige of rail history stands at the mouth of Cimarron Creek on the last remaining railroad trestle of the Black Canyon route.

Black Canyon of the Gunnison National Park encompasses some of the deepest canyons in the United States in addition to a diverse wildlife population. Although small in terms of acreage, this national park offers up the vastness of the Black Canyon.