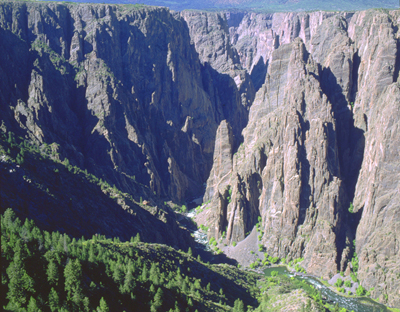 National Parks Image Gallery The Black Canyon is one of the most spectacular gorges in America. See more pictures of national parks.
©2006 National Park Services

Black Canyon of the Gunnison

The Gunnison River commences high in the central Rockies of Colorado. For nearly 100 miles, it flows through rolling sage-and-aspen-covered country before entering one of the most spectacular gorges in North America: the Black Canyon. Located about 250 miles southwest of Denver, Black Canyon is one of the newer national parks, created in 1999. President Clinton called it "a true natural treasure" when he signed the bill that designated the 30,000 acres of canyon and desert as national park territory.

Other services: A digital video theater

Black Canyon is a fitting name for the awesome chasms that plunge 2,700 feet -- almost twice the height of the Sears Tower in Chicago -- to the Gunnison River below. In fact, the depth and relative narrowness of the canyons block sunlight from reaching the bottom, except for about an hour each day. The waters now known as the Gunnison River eroded desert rock for millions of years, slowly chiseling the walls of this spectacular canyon.

The Gunnison River offers "Gold Medal Water" fishing for trophy brown and rainbow trout, according to the Colorado wildlife commission. Other activities for visitors include hiking, camping, rock climbing, and kayaking the Gunnison. On the next page, you'll find sightseeing tips and guidelines.