History: How the Coral Reefs in Biscayne Bay Were Formed 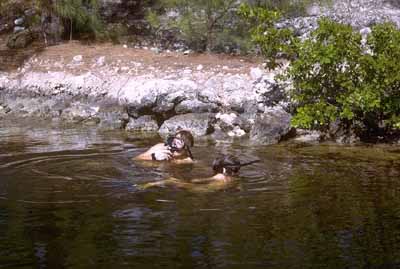 ©2006 National Park Services Snorkeling is a preferred method for observing the flora and fauna of the coral reef.

One of the main attractions of Biscayne National Park is the extensive community of underwater coral reefs. Coral reefs are formed over centuries as colonies of tiny polyps secrete an exoskeleton of calcium carbonate, or limestone, then live within the tiny nooks and crannies of the ever-growing formation. The accumulation of this skeletal material, broken and piled up by wave action, eventually produces a huge, rocky mass that can support an astonishing variety of animal and plant life.

Coral comes in many forms. As visitors to Biscayne tour the bay in glass-bottom boats, the floorshow includes giant brain coral and mountainous star coral. Some of these coral reefs are extremely tall, rising hundreds of feet from the seafloor, with branching shapes that reach out in every direction.

All the coral reefs in Biscayne Bay harbor an array of vibrantly colored fish that flit and flow around the gorgeous formations. You will see filefish, porcupine fish, angelfish, and sharks. Not all coral is hard as rock. In Biscayne Bay, you will also see soft corals, such as sea fans, rippling in the calm, clear water.

The History of Biscayne National Park

During the 17th century, this bay was the hideaway of the notorious pirate Black Caesar. He lured his prey with a tricky ruse of pretending to be adrift in an open boat. When passing ships stopped to rescue the pirate, his crew fell upon them in ambush. The Biscayne Bay pirates are now long gone; today, the waters are patrolled by manatees.

Like nearby Everglades National Park, Biscayne Bay was created by Congress under intense pressure from environmentalists, sportsmen, and other concerned citizens who wanted to save the bay from the threat of developers. In the 1960s, plans were made to build resorts and subdivisions on the northern keys and to put an oil refinery on the adjacent mainland. To prevent this from happening, Biscayne Bay was made a national monument in 1968. The protected area was expanded to its present size, which encompasses more keys and reefs, when it became a national park in 1980. Today, the park covers more than 170,000 acres.

An utterly unique environment in the United States, Biscayne National Park includes barrier islands, mangrove forests, and coral reefs. The wonders of the reef alone will make any visit to this underwater park unforgettable.