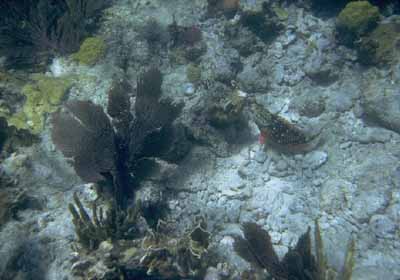 Visitors to Biscayne National Park may snorkel, scuba dive, kayak, or take boat tours among the subtropical waters and reefs. For the most part, the water is shallow -- less than ten feet between the keys and the mainland and increasing to 30 feet out among the reefs.

Nourished by the sun and the gently moving, warm-water currents, the reef systems are incredibly rich. Because the water is so shallow, it is a breeding ground for more than 200 kinds of marine creatures, including shrimp, spiny lobsters, sponges, and crabs. Looking into the shallow water, you might be able to see the colorful flash of a parrot fish swimming by, the bright glimmer of an angelfish, or the surprisingly graceful movements of an immense sea turtle.

Swimmers and divers can behold the exotic beauty of the reefs -- the crenelated surface of the brain coral, the widely branching elkhorn coral, and the bright colors of the fire coral. In addition, there are multitudes of small and large fish to observe, which include everything from schools of neon-bright hamlets to slow-moving solitary parrot fish. Other fauna include rays, sharks, barracudas, and moray eels. Biscayne Bay is also home to hundreds of manatees. With their gentle, doleful faces, these enormous mammals can grow as long as 13 feet and weigh a ton or more. Manatees use their front flippers to shove sea grasses and other underwater plants into their mouths. There are only about 1,000 of these great beasts left; all of them roam the waters of Florida.

For those unable to get into the water, tours in glass-bottom boats are conducted daily if surface winds are not too severe and bottom sediments are not too roiled. On these tours, visitors can float above rich green beds of sea grasses, which shelter such fascinating life-forms as sea urchins, sponges, sea worms, sea feathers, and sea whips, or they can head out farther into the magical fairy world of the coral reefs, where angel fish drift gently on the wave surge and the bright colors and unusual forms seem like something from a child's dream. One thing is certain: visit the legendary reefs of Biscayne once, and you will be sure to return.

©2006 National Park Services Visitors to Biscayne Bay can enjoy boating and fishing in addition to underwater activities like snorkeling and scuba diving.

Unless you own an underwater camera, you won't be able to take pictures of the sea life you encounter. But there are plenty of other photo-worthy possibilities, including:

The coral reefs at Biscayne Bay teem with exotic, colorful life forms. One wonders about the construction of this amazing underwater community that supports such an astonishing array of life. On the next page, learn how these reefs were formed.