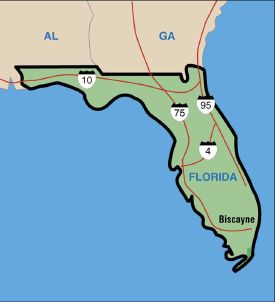 Biscayne National Park is a place of wonders. Located just a few miles from the crowded streets of Miami, this national park includes more than 170,000 acres and protects a unique assemblage of coral reefs, offshore islands, and associated aquatic environments in the upper Florida Keys. There are many water activities for visitors, including snorkeling and scuba diving among the reefs.

Visiting Biscayne National ParkWarmed by Gulf Stream waters flowing up through the sea like an immense river, Biscayne Bay extends eastward from the heavy mangrove forests of southern Florida to a string of low-lying barrier islands and coral reefs that protect it from the ocean.

The park encompasses Biscayne Bay between Key Biscayne and Key Largo, the northernmost islands of the Florida Keys. It is the only national park that is almost entirely underwater. Only five percent of its area is on dry land; the rest is an ocean wonderland.

The surface areas of the park consist of 42 barrier islands strung across the water like pearls on a string and the magnificent mangrove shoreline that is the one the East Coast's major undeveloped coastal areas. The mangroves help stabilize this shoreline by trapping their own fallen leaves in networks of tangled roots. This decaying matter, rich in protein, provides food for the tiny creatures that occupy the bottom of the bay's extensive food chain. The mangroves also attract many species of birds, including peregrine falcons and bald eagles.

The most prominent forms of life in Biscayne National Park are the extensive communities of underwater coral reefs. These are the only living reefs within the continental United States. To learn more about exploring the coral reefs and sightseeing at the Biscayne underwater park, go to the next page.