History: How Big Bend Was Formed 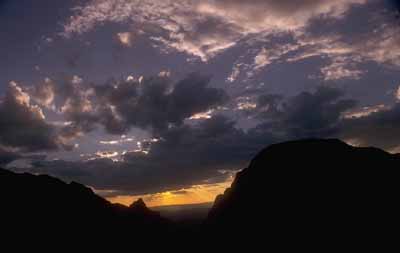 Hundreds of millions of years ago, first one and then another great inland sea flowed through the Big Bend National Park region, depositing thick layers of limestone and fossil-bearing shale. About 60 million years ago, mountains began thrusting up through the earth. At about the same time, a 40-mile-wide plain began sinking along fault lines. This left the awesome cliffs of Santa Elena Canyon to the west and the Sierra del Carmen mountains to the east.

Then, about 35 million years ago, volcanic activity began spewing vast amounts of ash and dust into the air and squeezing out magma, or molten rock, to form the Chisos Mountains. Some of the magma that cooled and hardened underground was later exposed by erosion.

Today, Big Bend remains a special place; it is at once desolate, haunting, and fascinating. Within the park are archaeological treasures, petrified trees, vestiges of prehistoric cultures, and unusual forms of plant and animal life. Geologically, the park encompasses some of the most fascinating and complex landforms on earth.

The History of Big Bend: Explorers and Inhabitants

Southwestern Texas is a wild land with a wild history. People arrived in Big Bend country about 10,000 years ago. They were probably nomadic tribes whose ancestors had crossed the Bering land bridge from Asia. The first farmers began cultivating the rich bottomland near the river in the thirteenth century A.D. These people may have wandered into the valley from Pueblo cities to the north.

According to legend, when Spanish soldiers and settlers arrived in the sixteenth century, they discovered a rich lode of silver at the top of a jagged mountain near a bend in the river where it had cut a spectacularly deep canyon. The Spanish soldiers enslaved the native people to work the mine, but eventually the miners rebelled, killed their Spanish overlords, and sealed the entrance to the mine so they would never have to work there again. Soon, more warlike tribes, such as the Mescalero Apaches, moved in from the north, launching lightning attacks on the Spanish settlements.

Later the Comanches made their way into the region, driven by encroaching white settlers from the Comancheria, their prairie homeland in northwest Texas. Skilled horse fighters, the Comanche warriors victimized both Spanish ranchers and Apaches, killing, taking slaves to sell in Mexico, and destroying livestock and crops. They eventually drove the Spanish settlers from the region. In 1821, Big Bend country became part of Mexico and, 15 years later, part of the Republic of Texas.

Despite a tumultuous history, Big Bend country today is a peaceful, if desolate, region. The unusual geology and diverse wildlife fascinate visitors who venture to this Texan outpost of natural wonder.