If You Are Attacked by a Grizzly 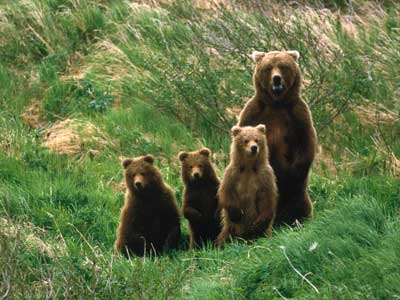 You don't want to get between a mother grizzly and her cubs.
Shin Yoshino/Getty Images

If a bear is moving toward you aggressively, what do you do? Most importantly, keep your composure and don't make any sudden moves. Avoid making direct eye contact with the bear -- it's a sign of aggression. Instead, show the bear you're being submissive by backing away slowly and speaking to it in a calm, monotone voice. This helps the bear identify you as human and not a threat.

Doing just that may be enough to allow you or the bear to leave the area safely. Sometimes, however, you may not be so lucky. If a bear continues to advance toward you, it's time to use your bear spray. Never travel into bear country without bear spray, which is a canister of pepper spray -- much like mace -- designed to repel and frighten bears. Use bear spray only as a last resort. You don't want to take a chance that you'll miss and simply agitate the bear more. And, you might be wondering whether you should use your gun, if you've got one. Guns versus bears isn't recommended, and not just because most national parks ban the use of firearms. According to a study by bear biologist Thomas Smith, bear spray halted aggressive bear behavior a whopping 92 percent of the time. Guns, on the other hand, were successful only 67 percent of the time. Bear spray casts a cloud of gas that swirls the bear's head, confusing and blinding it -- giving you precious time to escape. On the other hand, you'd need to fire a gun with pinpoint accuracy, which isn't easy to do if a gigantic grizzly bear is charging you. And, you'd probably need to get off multiple shots to do it in.

Most experts advise that once a bear makes contact with you, you should fight back as hard as you can. But this tactic works better with black bears than with grizzlies, as black bears are more timid. You can greatly reduce your chances of grievous injury from a grizzly if you play dead. Most grizzlies defensively attack, so it's important to show the bear you're no longer a threat. Don't play dead until the last possible moment -- you don't want to blow any chance of getting out of the way. If you're wearing a backpack, keep it on. Lie on your side in the fetal position, bring your knees to your chest and bury your head in your legs. Alternatively, lie on your stomach with your backpack on, covering the back of your neck with your hands. If the grizzly still won't stop attacking, you may have to fight back. Use any available weapon -- a rock, your fist, a hunting knife -- and try to aim for the bear's head, eyes or nostrils.

There are some documented cases of grizzlies coming into camping tents. These bears were usually hungry or overly aggressive. You should always sleep in tents big enough to stack your gear between you and the tent wall, for protection. A bear that enters your tent sees you as prey -- so don't play dead. Fight back, using your bear spray and anything else you've got. Make noise, shine your flashlight in its eyes, do anything you can. When a grizzly enters your tent, it's definitely a worst-case scenario.

A grizzly bear's claws can reach up to five inches long. That's one heck of a manicure.