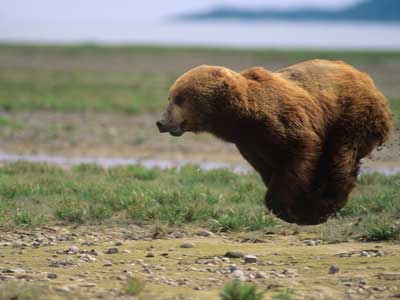 Bear on the run. Grizzlies may look slow and lumbering, but they can actually run at 30-mph speeds.
Ian Mcalister/Getty Images

You can cut your chances of ever encountering a bear if you pay attention to your surroundings. When you're hiking or camping, check with park officials about any bear sightings or activity. Bears like to frequent stream beds, berry patches and dense edge cover (the border of grass, weeds and shrubs along the forest line). If your vision on the trail is limited -- for example when you are rounding a blind curve -- sing or talk loudly to scare off any lurking bears. Don't let your dog run without a leash -- it could lead a bear right back to you. Look out for bear tracks or fresh bear scat on hiking trails. Any scat that is more than two inches in diameter probably is bear scat. Beware of any animal carcasses. Grizzlies are attracted to fresh kills and will hang around for days to protect their food source. Obviously, if you see a bear cub, the mother is not far behind. If you see any of these things, leave the area and report your findings to park officials.

Grizzly bears are typically active at dawn, dusk and during the night, but it's possible to encounter one at any time. If you can interpret a grizzly's body language, it will help you determine its intentions and how you should react. Bears primarily are solitary animals and they'll typically ignore humans unless they're surprised or they feel threatened. Grizzlies rarely seek out humans for attack, unless they're hungry and predatory -- in which case, yes, they'll likely attempt to kill and eat you. But most of the time, a grizzly just wants to remove a threat. A bear standing on its hind legs is not necessarily going to charge you; it's usually just trying to get a better look and smell. When a bear is agitated and upset, it will do any number of things -- put its ears back, lower its head, swing its head from side to side, paw at the ground, make woofing or growling noises or simply charge without warning. If a bear looks you directly in the eye with its ears back, it's definitely feeling threatened, and you should take this as a serious warning. If it begins to "pop" its jaw, it's getting ready to charge. It could "bluff" charge you to gauge your reaction, or it could knock you right down. Either way, never try to outrun a bear that's charging you -- it can reach speeds of up to 30 mph (48 kph). And even though grizzlies aren't the best climbers, they can reach up to 10 feet (304 cm) into a tree and have been known to scramble up after prey.

Why would a bear attack you in the first place? The most common reason is that you've met with a protective mother bear and her cubs. Other reasons? Surprising or startling a bear or getting too close to a bear's food. Or, the bear may simply be hungry and predatory. Just like Yogi Bear, a grizzly's main drive in life is to acquire food -- except a grizzly won't show up wearing a tie and politely nick your picnic basket. When you're camping and hiking, be extremely careful with food smells. Don't cook close to camp and be sure to store all your food in odor-proof containers, at least 14 feet (4.2 meters) up a tree and 4 feet (1.2 meters) away from the trunk.

Some bears will actually stalk you. Usually they're young male bears who have not yet learned the dangers of interacting with humans. In this case, you'll have to defend yourself aggressively. What do you do when a bear attacks?