About the Grizzly Bear 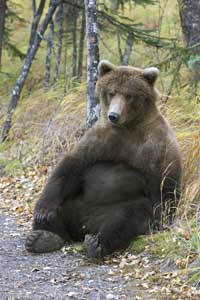 When you're camping or hiking, the two bears you're most likely to encounter are black bears and grizzly bears. It's important to know the distinction, since each type reacts differently to the presence of a human. For example, black bears tend to be more tolerant of people and live near human settlements. They're also generally less aggressive than grizzly bears.

Look for visual cues to tell the difference. Black bears may be black, but also brown, blue-black or even cinnamon-colored. Grizzlies also range in color, but primarily are brown. (Note: All grizzly bears are part of the species of brown bears, but not all brown bears are grizzly bears.) The hair on a grizzly's back and shoulders often has white tips, lending it a "grizzled" appearance. A grizzly has more of a shoulder hump, and a more concave face profile. A black bear has no shoulder hump and its facial profile is flatter (some describe it as having a "more Roman nose" than a grizzly). A black bear has short (1.5 inch, or 3.8 cm), dark claws, while a grizzly's are very long (2 to 5 inches, or 5 to 12.7 cm) and light in color. Grizzlies also tend to be bigger than black bears. Male grizzlies weigh around 500 pounds (226 kg), but some top out at 800 (362 kg). Black bears average 300 to 400 pounds (136 to 181 kg). Grizzlies stand around 3.5 feet (106.6 cm) at the shoulder and can stand up to 6.5 feet (198 cm). Black bears stand up to about 5 feet (152 cm). Oh, and don't ever try to outrun a grizzly -- they can reach 30 mph (48 kph).

There are about 200,000 grizzly bears worldwide. Although plentiful in locales like Russia, until recently grizzly bears were in danger of extinction in the United States. Today, the IUCN List of Threatened Species lists them as "Least Concern." However, the grizzly population is still under threat in isolated areas due to their low numbers. There are more grizzlies in Alaska and Canada than the continental United States, where only about 1,000 grizzlies remain.

Grizzly bears prefer mountain forest, tundra and coastal habitats. They're often found feeding at salmon breeding areas. They're omnivores and will eat just about anything -- plants, insects, fish, dead animals, hoofed animals and occasionally livestock. Around November or December, bears go into a dormancy period in their dens. But they don't go into complete hibernation and will occasionally emerge to forage for food.

Grizzlies are much more aggressive than black bears, due to evolution. Because of their long claws and shoulder hump, grizzlies can't easily climb trees to escape a threat (black bears can and do climb trees). Instead, grizzlies stand their ground. Mother grizzlies are particularly aggressive. Experts believe this aggression is linked to the fact that grizzlies tend to produce only six to eight cubs in a lifetime, compared to black bears that rear 12 or 13 cubs. Additionally, black bear cubs only remain with their mother for about a year, while a grizzly's cubs won't cut the apron strings for up to three years.

Brown bears have an extremely keen sense of smell and can detect odors up to a mile away! Experts believe a bear's hearing and eyesight are equivalent to a person's. What happens when you and a grizzly meet?

If you're a sportsman who hunts in grizzly country, use caution. The sound of a gunshot is like a dinner bell to a grizzly bear. After felling an elk or other big game, many a hunter has come upon a grizzly taking ownership of the carcass. Hunters should be careful when approaching their kills and should never try to take the carcass if it looks like the site has been disturbed by a bear. The bear is likely hiding nearby in a protective position. Sometimes, it's better to just let it go.