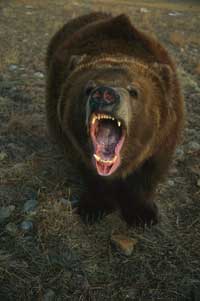 Mammal Pictures This grizzly doesn't have a friendly look on its face. What should you do? See more pictures of mammals.
Konrad Wothe/Getty Images

A grizzly bear is probably the scariest thing you can imagine encountering when you're hiking or camping in the woods. Respect your fear -- a grizzly attack would likely kill you or leave you severely maimed or scarred.

The most famous recent grizzly attack was probably the attack on Timothy Treadwell, a grizzly bear activist who spent time living among the bears in Alaska. In October 2006, Treadwell and his girlfriend Amie Huguenard were fatally attacked by one of the bears they'd come to love, documented in the Warner Herzog film "Grizzly Man."

Grizzly attack stories date back through the ages. As the story goes, in 1823, fur trapper Hugh Glass was on an expedition up the Missouri River, headed toward Yellowstone Park. Separated from his group, Glass accidentally surprised a mother grizzly and her cubs, and before he had a chance to grab his gun, the grizzly attacked him. Legend has it, he'd wrestled the bear to the ground by the time his men showed up to shoot the bear. But his injuries were so great that, after bandaging his wounds and sitting vigil for a few days, his men took his rifle and knife and left him there in a shallow grave. Glass actually survived to tell the tale, setting his own broken leg and wearing the grizzly bear pelt for warmth as he hiked for two months. A monument still stands at the site where Glass fought the grizzly.

The stories of Timothy Treadwell and Hugh Glass seem almost unbelievable. But grizzly bear attacks can and do happen to people just like you and me.

Although there are no formal statistics on bear attacks, collected news reports show at least 24 fatal attacks during the current decade in the United States and Canada [source: Black Bear Heaven]. In Alaska, there were eight non-fatal bear attacks in the first eight months of 2008 [source: Vick].

An encounter with a grizzly doesn't always have to end in bloodshed -- that's your blood or the bear's. By using safe hiking and camping practices, learning to read a bear's body language, staying calm and protecting yourself, you can greatly increase the odds you'll walk away from a grizzly in one piece.