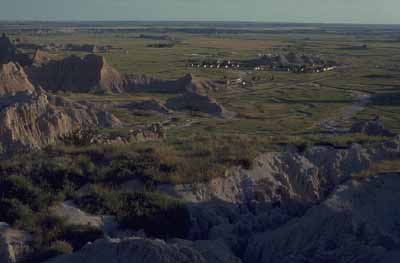 Conveniently located about one hour south of Rapid City, South Dakota -- on the old homeland of the Sioux -- the Badlands is a unique national park that features both high northern prairie wildlife and outstanding geological features. Without the big crowds of some of the other western parks, the Badlands is a good place to experience the solitude of nature.

Other Services: Two campgrounds and a park lodge

The term "badlands" was first used to describe the area of South Dakota that is the world's most extensive and best example of this kind of topography. Badlands are found in many parts of the world. This kind of geological formation usually occurs in semiarid climates and is characterized by countless gullies and ridges, as well as sparse vegetation.

Badlands National Park, almost 100 miles long and 50 miles wide, cuts across the Great Plains of southwestern South Dakota. But you can walk or drive across the rolling grasslands almost to its borders without being aware that this vast expanse of otherworldly terrain is nearby. Suddenly, in a matter of a few yards, you are amid a theatrical and bewildering jumble of towers and imposing buttresses. Rock palaces, hundreds of feet high, loom large against big prairie sky.

The terrain of the area is so arid and the land formations so eerie that the Sioux called this place mako sica, or "bad land." French-Canadian trappers called it les mauvaises terres a traverser, or "bad lands to cross."

In addition to the beauty of the area, there is much to be learned from a paleontological point of view. The evolution of certain prarie mammals can be studied in the rich fossil beds of the Badlands. Fossil demonstrations are available to visitors of the park, as are ranger-led walks. For more ideas on sightseeing at Badlands National Park, go to the next page. 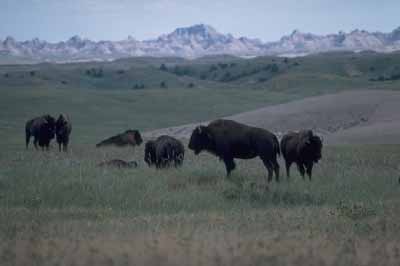 Badlands National Park is a stunning amalgamation of rock spires, castles, cathedrals, and battlements sitting on rolling praries. Dividing the northern grasslands from those in the south, which are about 200 feet lower in elevation, the great Badlands Wall extends for 100 miles.

This multitude of pinnacles, spires, pillars, shelves, and chimneys is an immense natural barrier cutting through the landscape. The Wall is almost impossible to see from the northern plains, but it rises above the southern plains like an ancient and abandoned city skyline.

Visitors will discover perpetually active prairie dog colonies and quietly grazing herds of bison, golden eagles soaring overhead, and scattered bands of mule deer and pronghorn antelope. One of the rarest and most endangered mammals in the world is the black-footed ferret, which can occasionally be seen on the park grasslands, where it lives and feeds on the prairie dogs.

Elsewhere in the park there are brightly colored ridges (the sedimentary bands of color range from gray and blue to yellow and pink) and sandy tablelands. The park is best visited in the spring when the prairie wildflowers (evening primrose, mariposa lily, wild rose, and scarlet globemallow) are at their peak or in the fall when the summer sun has bleached the prairie grasses and the cloudless blue sky goes on forever. Such scenic wonder is a fabulous experience for all visitors who love the great outdoors.

Landscape photography in the Badlands is best pursued at sunrise or sunset when the warm orange and red light adds to the brilliance of the natural earth tones and blue shadows that begin to artfully form among the contours of the earth. Here are some stunning views you'll want to photograph:

Whether you choose to hike for a few hours or spend a few days camping and exploring the Badlands, the magnificent landscapes will stimulate your imagination. For a geological history of the region and a discussion of the area's previous dwellers, go to the next page.

History: How the Badlands Were Formed 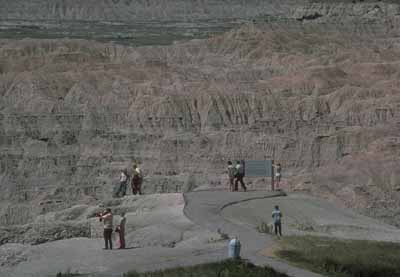 ©2006 National Park Services Visitors are awed by the Wall, which divides the northern and southern grasslands.

Badlands National Park features the unique topography characterized by sharply eroded buttes, gullies and ridges that has come to be known as badlands. The Badlands are cut from deep alluvial and volcanic ash deposits that have been sculptured and carved into fantastic forms by the continuous action of wind and water falling in infrequent but torrential downpours.

It all began about 80 million years ago when the Pierre shale, the bottom layer of the Badlands geology, was laid down by a great inland sea. About 35 million years ago, rivers and streams running downhill from the Black Hills spread sand, mud, and gravel on the area. Volcanic activity, probably originating in the Rocky Mountains to the west, poured vast quantities of wind-borne ash on the plains of South Dakota.

For a few more million years, the land built up faster than it was eroded away. Then the balance changed, and wind and water went to work to create the geological wonderland we see today.

One of the park's most monumental geological formations is the Wall. In the Badlands, water is the force that sculpts the earth, but this powerful element is assisted by winds that "sandblast" the stone with airborne grit and dust. An annual cycle of freeze and thaw also contributes to the ongoing creation of the Wall, which is occurring at a phenomenal rate, geologically speaking. Photographs taken just 50 years ago show different formations than those seen today; this is the result of unusually rapid erosion. Measurements by geologists confirm that the Wall's surface is wearing away at an almost unbelievably fast pace; in some places, an inch or more is removed from the surface each year.

History of the Badlands: Inhabitants and Exploration

Early pioneers avoided the Badlands, but people have lived among these strange formations for millennia. Within Badlands National Park, more than 80 archeological sites have been discovered, indicating that the first humans arrived in the area as long as 11,000 years ago. These people were probably nomadic hunters and gatherers who may have been among the early arrivals from Asia across the Bering land bridge.

In more recent times, the Dakota Indians, more commonly known as the Sioux, were masters of the northern plains. During the last years of their wars with the United States, they used the remote Badlands as their stronghold against the U.S. Army.

In the late 1880s, the Sioux adopted a mystical religious movement that incorporated what became know as the Ghost Dance. Other Indian tribes, such as the once-feared Comanche, who were making a last stand against encroaching white settlers on the southern plains, also embraced these beliefs. The Ghost Dance ceremony, which could take days to perform, promised that the white farmers and ranchers would disappear and that the buffalo would return.

The ritual was outlawed by the U.S. government, but for many years the Sioux danced without interference in the Badlands. The last Ghost Dance took place in 1890 on Stronghold Table just a few days before more than 150 followers of Big Foot, chief of the Miniconjou Sioux, were massacred by U.S. troops at Wounded Knee, 25 miles to the south. Today, Stronghold Table is at the end of a long rutted road that winds through lonely grassland. It is a haunting place that seems to be alive with the memories of this last dance before the final defeat and capitulation.

Despite the unfavorable reputation of the Badlands in the nineteenth century, at least one early visitor was fascinated by this stark and angry landscape eroded out of the surface of the prairie. In 1848, Father Pierre-Jean DeSmet wrote: "Viewed at a distance, these lands exhibit the appearance of extensive villages and ancient castles."

History of the Badlands: Disappearing Wildlife

With the Sioux defeated and the pioneers long gone, the Badlands are a picturesque backdrop for herds of bison. The animals were reintroduced into the area in 1963 after having been nearly exterminated by white hunters in the nineteenth century. Also wandering on the endless grasslands are lovely and graceful pronghorn antelope. Rocky Mountain bighorn sheep were brought to Badlands in 1964, and coyotes roam throughout the park as well. Other animals that once lived here -- the grizzly bear, gray wolf, and American elk -- are gone.

Gone for an even longer time are such creatures as the titanothere, an early ancestor of the horse that was about 10 feet tall and fed on prairie grasses millions of years ago. Some of the world's richest fossil beds are located in the Badlands. The remains of hundreds of prehistoric animals have been found, including an ancestor of the camel; a sheeplike creature with three horns, called the protoceras; and the fierce saber-toothed tiger.

©2006 National Park Services The harsh terrain of the Badlands recalls the long history of a plain that was eroded by the powerful forces of wind and water.

The Badlands region is unique, rich in history and geology. Someone once said of the Badlands: "It's a good place that's gotten a bad name." Chances are, anyone who has visited Badlands National Park will agree.