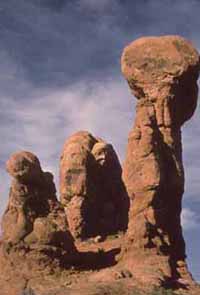 ©2006 National Park Services A fantasyland of rock, the park is filled with giant balanced rocks that look as though they are about to teeter and fall.

High above the Colorado River, Arches National Park is a geological maelstrom that has been shaped by eon after eon of weathering by rain, snow, ice, and wind.

Most of the formations in the park are composed of Entrada sandstone, which geologists say was part of a low arid coastal plain adjacent to a great inland sea 150 to 200 million years ago. Over time, the sand was covered by layers of sediment and hardened into rock.

Then the land was lifted up, tilted, and eroded until the Entrada layer was exposed to the weather. At first, water and wind cracked the exposed sandstone. Then, narrow canyons and gullies were scoured out of the stone, leaving thin walls called "fins" in between.

The next phase in the process occurred as wind and frost brushed away at the soft interior area of some of these fins, eventually perforating them with a window. Such an opening gradually enlarged until the window became an arch.

The park's most photographed attraction, Delicate Arch, is isolated in its own amphitheater, framing a stunning view of endless sandstone. Landscape Arch, with a span of 306 feet, is the longest in the world and only one of eight arches along the just over seven-mile-long Devils Garden Trail.

Arches National Park is more than a concentration of spectacular rock arches. Well-preserved petroglyphs carved into a cliff in the park testify that people have inhabited the region for a long time. The pictures depict riders on horseback, indicating that the carvings were made sometime after the middle of the sixteenth century when Spanish explorers first introduced horses to the Southwest. The highway that runs past the Visitors Center actually follows the same route as the old Spanish Trail connecting Sante Fe to Los Angeles.

There is evidence that a French trapper named Denis Julien passed through the area in 1844, but the first attempt to settle there was made by a group from the Mormon Church about a decade later. It wasn't until the 1880s that ranchers, prospectors and farmers settled permanently in southeastern Utah.

©2006 National Park Services The unusual rock formations in Arches National Park  have been formed by wind and water over millions of years.

The landscape at Arches National Park is constantly changing -- natural spectacles such as the Fiery Furnace, a dense array of red fins, could one day become arches. But today we admire them as they appear to turn into tongues of fire when the sun is low in the sky. Sights like these are what make the journey to Arches National Park worthwhile for travelers from around the world.