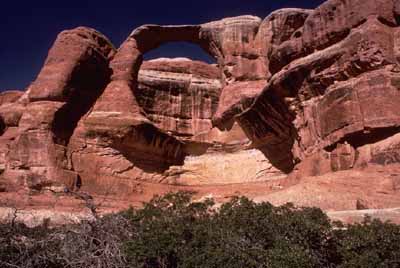 Chiseled by the powerful forces of wind and water, Arches National Park contains the planet's most remarkable collection of natural sculpture. Remotely located about 240 miles southeast of Salt Lake City, the park contains more than 2,000 sandstone arches. But these spectacular sandstone portals are only part of Arches' stunning landscape. Plan to spend several hours exploring the natural rock garden -- or spend a night beneath the stars at Devils Garden Campground.

Visitor Centers: The visitor center is open daily, except December 25.

Other Services: One campground

A fantasyland of rock, Arches National Park is filled with giant balanced rocks that look as though they are about to teeter and fall. There are pedestals and spires that resemble a child's drip castles enlarged to enormous scale. Glistening slickrock domes are inlaid with swirls of stone cut by red sandy washes and dotted with wildflowers in spring. These formations sparkle and shimmer beneath an enormous blue sky.

Arches is perched atop the Colorado Plateau, a high desert region stretching from western Colorado across southern Utah and northern New Mexico to Arizona. This area is one of the most sparsely populated region of the contiguous 48 states, but it contains the nation's greatest wealth of national parks. It is a place teeming with scenic treasures almost beyond belief: mountains, gorges, rushing rivers, great canyons, escarpments, buttes, spires, pinnacles, and endless stretches of desert landscape.

If you're planning to visit Utah, a trip to Arches is well worth the time it takes to get there. You'll witness firsthand the unusual landscapes that have been backdrops for some well-known movies. To read about the most impressive sights (and to learn which movies Arches has been in), go to the next page. 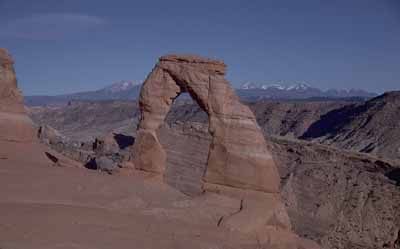 ©2006 National Park Services Delicate Arch, which is 65 feet tall and 35 feet wide, perches on the rim of a canyon. The arch is all that remains of a huge sandstone wall called a fin.

Arches National Park contains the world's largest concentration of natural stone arches. There are hundreds of them, and they come in every shape and color imaginable, from the world-famous Delicate Arch to the colossal Landscape Arch. Another noted feature that is easily accessible via the park road is "Park Avenue," where vertical slabs or fins of red Entrada sandstone tower over the surrounding painted desert like New York skyscrapers.

Close by Park Avenue is Courthouse Towers, where some of the best hiking in the park is found. Visitors often spot such high-desert fauna as mule deer and coyotes at sunrise and sunset. The Windows section of the park provides yet another set of fantastic vistas. The lovely rock scenery has been featured in such classic films as Steven Spielberg's Indiana Jones and the Last Crusade (Double Arch) and the comedy City Slickers (North Window).

Of course, no trip to Arches would be complete without a walk through Devils Garden, an intricately eroded region of red and orange sandstone in which hikers can view such features as Fin Canyon and Tunnel Arch.

A scenic drive through Arches climbs from the floor of Moab Canyon to Devils Garden. Along this 18-mile, one-way drive you pass a lovely slickrock expanse called the Petrified Dunes. With the snowcapped La Sal Mountains rising in the distance, the dunes are a spectacle of form and contrast.

The grandiose spires and arches of the park provide natural subjects for landscape photography. Be sure to capture the following sights:

©2006 National Park Services Landscape Arch defies the laws of engineering. It is 291 feet long, 65 feet high, and only six feet thick at its narrowest point.

There are literally hundreds of arches and other formations to see. But how did all these stunning formations come to be? On the next page, we'll examine the natural forces that came together  to create the Arches.

©2006 National Park Services A fantasyland of rock, the park is filled with giant balanced rocks that look as though they are about to teeter and fall.

High above the Colorado River, Arches National Park is a geological maelstrom that has been shaped by eon after eon of weathering by rain, snow, ice, and wind.

Most of the formations in the park are composed of Entrada sandstone, which geologists say was part of a low arid coastal plain adjacent to a great inland sea 150 to 200 million years ago. Over time, the sand was covered by layers of sediment and hardened into rock.

Then the land was lifted up, tilted, and eroded until the Entrada layer was exposed to the weather. At first, water and wind cracked the exposed sandstone. Then, narrow canyons and gullies were scoured out of the stone, leaving thin walls called "fins" in between.

The next phase in the process occurred as wind and frost brushed away at the soft interior area of some of these fins, eventually perforating them with a window. Such an opening gradually enlarged until the window became an arch.

The park's most photographed attraction, Delicate Arch, is isolated in its own amphitheater, framing a stunning view of endless sandstone. Landscape Arch, with a span of 306 feet, is the longest in the world and only one of eight arches along the just over seven-mile-long Devils Garden Trail.

Arches National Park is more than a concentration of spectacular rock arches. Well-preserved petroglyphs carved into a cliff in the park testify that people have inhabited the region for a long time. The pictures depict riders on horseback, indicating that the carvings were made sometime after the middle of the sixteenth century when Spanish explorers first introduced horses to the Southwest. The highway that runs past the Visitors Center actually follows the same route as the old Spanish Trail connecting Sante Fe to Los Angeles.

There is evidence that a French trapper named Denis Julien passed through the area in 1844, but the first attempt to settle there was made by a group from the Mormon Church about a decade later. It wasn't until the 1880s that ranchers, prospectors and farmers settled permanently in southeastern Utah.

©2006 National Park Services The unusual rock formations in Arches National Park  have been formed by wind and water over millions of years.

The landscape at Arches National Park is constantly changing -- natural spectacles such as the Fiery Furnace, a dense array of red fins, could one day become arches. But today we admire them as they appear to turn into tongues of fire when the sun is low in the sky. Sights like these are what make the journey to Arches National Park worthwhile for travelers from around the world.