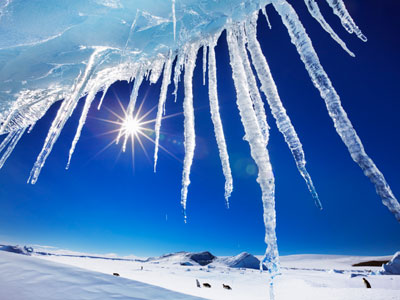 Ice. Snow. Water. Penguins. The allure of Antarctica. This cold, southernmost continent is an increasingly popular tourist destination. Its vast landscape of ice and snow, as well as its wildlife population, attract nature-loving vacationers and some tourists who enjoy activities like kayaking or cross-country skiing. Others simply float through the area onboard a cruise. Whatever the reason people come to Antarctica, they're coming. And it's causing some controversy.

But before we get into that, let's look at some facts about Antarctica.

Antarctica is a land mass located around the South Pole and it has more ice than any other place on Earth. In fact, 99.5 percent of its land mass is covered in ice. During Arctic winter, the ice sheet covering the continent gets even bigger. Antarctica is our fifth largest continent, at 5.4 million square miles (14.2 million square kilometers), coming in between South America and Europe. Its shape is roughly circular, with one arm reaching out toward South America. This is why many trips to Antarctica are via Argentina.

Even during its warmest period (November to February), Antarctica's temperatures mostly stay below freezing. During the winter, they can drop as low as minus 90 degrees Fahrenheit (minus 68 degrees Celsius). The continent receives little precipitation and its snow is dry and powdery. Its constant strong and blustery winds can reach speeds of 200 miles per hour (321 kilometers per hour).

Naturally inhospitable to humans and most animals, Antarctica wasn't even formally explored until the 19th century. Today, though, many scientists and researchers call Antarctica their temporary home, living in special facilities while they study the ecosystem and native life.

What kind of life is there on Antarctica? The harsh climate and landscape isn't kind to most land animal life. The sea, though, is a different story. The southern oceans are full of nutrients and protein. The abundant food sources sustain many species, including whales, sea birds, seals and more. The most famous ambassador of Antarctica is the penguin, a bird that lives in colonies on the Antarctica shores and feeds from the sea.

Since Antarctica has no human inhabitants, many nations have laid claim to it, including Argentina, Australia, Chile, France, Great Britain, New Zealand and Norway. However, the terms of the Antarctic Treaty of 1959 state that the continent is reserved purely for scientific research. This also keeps Antarctica a war-free and nuclear-free zone. Currently, 47 countries have signatures on the treaty.

For those visitors who aren't conducting scientific research on the continent, what's to see and do in this icy land?

The first step to vacationing in Antarctica is getting there. It's not a likely place for a commercial airport or highways in and out. Most travel to Antarctica happens by sea or, less frequently, by small plane. Tourist ships typically begin the journey to Antarctica through southern Argentina or Chile, countries with easy ocean access to the continent.

The first commercial cruise ship visited Antarctica in 1969. Tourism to the region has steadily climbed since then. In the early 1990s, the continent had about 9,000 visitors per year. In the 2007 to 2008 time period, that number blossomed to more than 46,000 [source: British Antarctic Survey]. These numbers include people visiting by air, land or sea.

To deal with the concerns of the growing tourist industry, the International Association of Antarctica Tour Operators (IAATO) formed in 1991. Its mission is to promote ethical and safe travel to the Antarctic area. IAATO's roster includes 102 tour company members.

Tourism in the Antarctic unfolds mostly in the months between November and March. Temperatures are warmer then, resulting in a smaller ice sheet. Thus, ships can get through the area more easily. Most trips center around the Antarctic Peninsula region. Expedition ships may visit some sub-Antarctic islands and other more out-of-the-way places. Some tour operators even offer private trips to the geographic South Pole.

The most popular Antarctic vacations are sightseeing cruises. Some cruises do allow visitors to make landings -- meaning leave the boat and explore the Antarctic landscape. But these visits are usually short, due to the harsh temperatures. Bigger ships will drop anchor out at sea, and groups of passengers will take smaller boats to land. Some tour operators use helicopters to transfer passengers as well.

The Atlantic Treaty asks visitors to the continent to abide by the following guidelines:

So, now that you've arrived in Antarctica, what kinds of activities are available to you? Read on to find out.

Don't Hassle Me, I'm a Local

The first person born in Antarctica was Emilio Marcos de Palma, in January 1978. Argentina set the whole thing up in an attempt to establish sovereignty in Antarctica. The Argentinean government flew Marcos de Palma's pregnant mother to a research base where her husband worked so she could give birth there. Chile did the same thing in 1984 with the birth of Juan Pablo Camacho. Since then, many more children have been born in Antarctica, but no nation currently enjoys sovereignty.

What to See and Do in Antarctica

Once you arrive in the Antarctic region -- by land, sea or air -- there are several ways to pass the time. Popular tourist activities include cruises, visits to research sites and wildlife sightings. Travelers who are more adventurous can sign up for hiking, mountaineering, kayaking or cross-country skiing.

Even on a continent as barren as Antarctica, there are a few "must-sees." Some spots you can see right from your boat or ship, and others require a trip to land.

Lemaire Channel runs between the Booth Island Mountains and the Arctic Peninsula. Its unofficial name, Kodak Gap, speaks to its photogenic beauty. When not blocked by ice, cruise ships sail through the channel to give passengers an opportunity to enjoy its splendor. A Belgian named Adrien de Gerlache first navigated the channel in 1898.

The Amundsen-Scott South Pole Station is an American research station located at the South Pole. It's named after Roald Amundsen and Robert F. Scott, the first two explorers to reach the South Pole in 1911 and 1912, respectively. Built in 1957, the facility underwent major upgrades in both 1975 and 2008. Its most striking feature is the geodesic dome, originally built to house staff. Currently the station hosts about 50 scientists and personnel in the winter, and up to 150 in the summer. Research taking place at the station includes projects involving physics, meteorology, geophysics, glaciology and biomedicine. The ceremonial South Pole marker (a literal red and white pole with some flags stuck in the ice behind it) sits in front of the station -- a great photo op for visiting dignitaries and tourists.

If you're an athlete who feels you've "been there and done that," Antarctica might be your next challenge. Adventure Network International organizes full and half marathons in interior Antarctica. We're talking minus 20 degrees Fahrenheit (minus 28 degrees Celsius) temperatures, high elevations, whipping wind and snow. The trip will run you about $16,000. 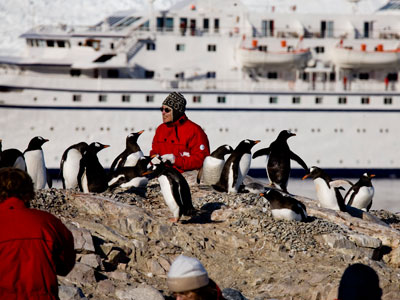 A tourist gets a closer look at Antarctica's penguins.
Michel Setboun/Getty Images

For optimum penguin viewing, visit the Dawson-Lambton Glacier. Emperor penguins live here in colonies, incubating eggs and raising chicks. Some companies offer photo safari tours, where tourists can camp in sealed tents (to hold in the heat) and enjoy a few days of photographing these Antarctic birds. The nice thing is that penguins aren't afraid of humans and simply ignore them, so a person can get very close to a penguin to take a good look or snap a shot. Penguins aren't afraid of humans because they evolved without us as threats or predators. Naturalists do warn, though -- the simple act of viewing an animal can cause it stress, which could affect its chick-rearing abilities [source: Lovgren].

Adventure travel operators offer many activities for those who enjoy the outdoors (and the cold!). Experienced mountaineers can climb Mount Vinson, the highest peak in Antarctica. The climb to the summit is approximately 4.5 miles (7 kilometers) and is for serious climbers only.

Cross-country skiers can ski to the South Pole in a two- to three-week trip, camping along the way. Some cruise ships offer kayaking expeditions, where you can kayak among the glaciers and see the sights up close. What about swimming? In summer, the sea "warms up" to 32 degrees Fahrenheit (zero degrees Celsius). Temperatures this cold can cause cardiac arrest or other bodily injury. But if you want, you can give it a try.

What happens if you're injured or become sick while visiting Antarctica? Cruise ships likely have medical facilities, as do some of the Antarctic research bases. Tour operators also employ medical professionals on staff. However, these professionals can really only meet very basic medical needs. In the case of a serious accident or illness, patients must go back to Chile or Argentina. Weather conditions can sometimes make this trip long and arduous, and it's at the patient's expense. Speaking of expense, trips to Antarctica aren't cheap. The more intense vacations can cost up to $10,000.

An Antarctic vacation certainly sounds breathtaking and unique. Before you book a trip, though, you might read the following page regarding the environmental and safety concerns of Antarctic tourism.

In April 2009, a joint session of the Antarctic Treaty panel and its sister organization, the Arctic Council, met in Baltimore, Md. The agenda included talks on global warming and shipping routes, but also included some questions about tourism. Around the same time the session met, a 25-mile (40-kilometer) wide Antarctic ice shelf broke off and shattered into the sea. Scientists blame global warming. And as more ice melts and separates, Antarctica will become smaller and smaller [source: Doyle]. Less ice equals more water, which allows big cruise ships to enter areas they previously weren't able to access.

Concerned about the environmental and safety impacts of rising Antarctic tourism rates, several countries are considering establishing regulations on tourism in the Antarctic area. Some of these regulations would include:

Currently, most large cruise ships don't have strengthened hulls that can withstand striking an iceberg. Besides the potential loss of human life in a ship accident, a massive fuel spill could be catastrophic to the ecosystem.

Shipwrecks can and do happen in the Antarctic. Since 2007, four ships have run aground in Antarctica. Running aground can cause a ship to leak fuel and it puts passengers in jeopardy. All passengers on these ships evacuated to new boats without injury. In November 2007, a ship called the M.S. Explorer hit an iceberg and sank within 24 hours. Passengers shivered in lifeboats for hours before rescue arrived from a Norwegian cruise ship. Experts say that it's only a matter of time before an accident claims hundreds of lives. Because Antarctica is so remote, options for search and rescue are extremely limited.

Travel in and out of Antarctica, especially air travel, is completely dependent on the weather. "Today Show" anchor Ann Curry learned this the hard way in 2007. After trekking to the South Pole for a story called "Ends of the Earth," Curry and her crew found themselves twiddling their (very cold) thumbs at Admunson-Scott Station for days, waiting out a storm. This isn't uncommon in Antarctica. Some vacation companies actually advise potential tourists not to make any important plans two weeks before and two weeks after a planned trip to the continent.