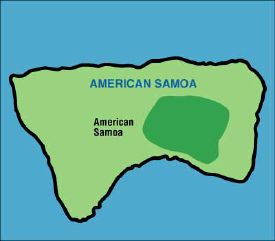 Situated approximately 2,300 miles south of Honolulu, American Samoa Natonal Park actually is closer to Auckland, New Zealand, than it is to any city in the United States. Its three volcanic islands and two coral reefs provide an array of activities and striking sights. In addition, travelers are amazed by the 3,000-year-old Samoan culture that still thrives on the islands today. This remote national park is accessible by air with flights from Honolulu to Pago Pago on Tutuila Island.

Entrance fees: There are no entrance fees. However, visitors must obtain permission to enter the park.

Visitor centers: The visitor facilities are currently located outside the park.

Accommodations: Hotel-style lodging is available on all three islands. Camping is prohibited.

Samoa is a dazzling chain of jewellike islands twinkling across a lonely expanse of the South Pacific. Parts of three of the easternmost islands and two coral reefs comprise American Samoa National Park. Formed by volcanic activity originating on the floor of the ocean, the Samoan islands are a tropical paradise of mountains, rain forests, deep harbors, and stunning white beaches.

Anyone considering visiting American Samoa National Park should know that it’s one of the top cliff diving spots on the planet. Check out this great cliff diving article and awesome video footage from Discovery’s Fearless Planet to learn more about adventure sports around the world.

Park travelers can enjoy snorkeling off of Ofu Island, hiking on the Pago Pago trail, and swimming in the azure waters. To learn more about sightseeing at American Samoa National Park, see the next page. 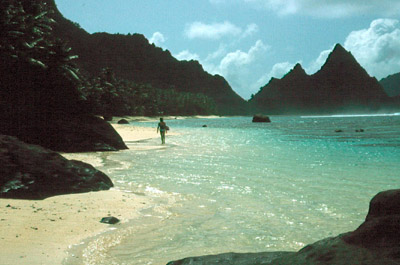 The northern and most accessible section of the park rises above Pago Pago's harbor in great volcanic ridges covered with dozen upon dozens of species of tropical trees and vegetation. The park encompasses coastal villages, tropical lagoons, and a dramatic scenic highway with fine views of a Pacific coral reef. Among the unusual wildlife found here are more than 35 species of brightly colored birds, as well as the endangered flying fox, which is actually a fruit bat with a three-foot wingspan.

The largest section of the park, about 5,000 acres, lies on Ta'u, the easternmost island and a half-hour flight from Pago Pago. This section includes Lata Mountain, which seems to rise nearly straight up from the Pacific and at 3,170 feet is the highest volcano in the islands. The Ta'u section of the park also includes 300 offshore acres.

The park's smallest section is on Ofu, a volcanic island just west of Ta'u. It encompasses only 260 acres of land and water, but has one of the finest beaches in the South Pacific. Most people would agree that this stretch of white sand and stately palms defines what a tropical paradise should look like. Lying just offshore and protecting a lovely blue lagoon, a healthy coral reef teems with a vast array of sea life.

Visitors to American Samoa National Park have an opportunity to see firsthand some of the best preserved coral reefs in the Pacific Ocean.

The reefs harbor an astonishing array of sea life. Vibrantly colored fish in hundreds of varieties dart around the spectacular limestone formations that protect them from the vagaries of the weather, strong Pacific currents, and such predators as the several species of sharks that haunt the reefs.

Coral reefs are produced over centuries by the secretions of colonies of tiny polyps, usually stony corals. The accumulation of their skeletal material is gradually broken and piled up by the motion of the waves. The structure of the reefs changes constantly, although this is not evident to the casual observer.

There are three kinds of coral reefs: the barrier reef, which usually lies far offshore and protects a wide deep lagoon, such as Australia's Great Barrier Reef; the atoll, a reef surrounding a lagoon with no central island; and the fringing reef, a coral platform close to the shore that follows the coastline, such as the reef found in American Samoa National Park.

Amateur photographers can find any number of compelling portraits at American Samoa National Park. Here are some suggestions:

In addition to the natural beauty of the islands, the American Samoan culture is fascinating and highly accessible to visitors. Learn about the Samoan way of life on the next page. 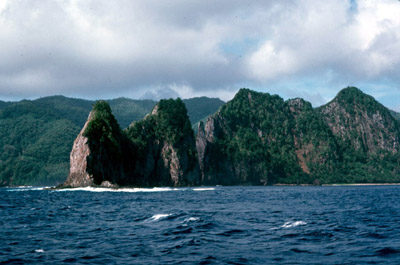 ©2006 National Park Services The stunning beauty of the Samoan islands is enhanced by the friendliness of its people.

For more than 3,000 years, members of Polynesia's oldest culture have lived on the islands of American Samoa National Park. Samoa means "sacred earth," the name reflecting the belief of the people that the islands are a special place to be cherished and protected. In 1988, believing that their own ancient culture also needed protection, Samoan chiefs agreed to lease some of their territory to create a national park. Permanent leasing arrangements are still being worked out, and visitors must obtain permission to enter this relatively new and extremely unusual park.

One of the first things visitors notice about the Samoans are the detailed tattoos that snake from their waists down to their knees. Traditionally a rite of passage for boys, the tattooing is performed by the tufuga (tattooist) with a cutting tool, mallet, and ink made from the soot of burnt candlenut shells. The process may take a month or more and is done without the benefit of anesthesia, making it extremely painful. The resulting pe'a, or traditional tattoo, is quite intricate and from a distance gives the appearance of clothing because it is so heavily filled in. Women may also be tattooed, but theirs tend to be smaller.

The inhabitants of the Samoan islands are known as cheerful, good-natured people, and they are eager to welcome visitors into their midst. Travelers planning a visit to the American Samoa National Park should consider a home stay in one of the local villages, where they will be immersed in Samoan culture. At the same time, the fee for a home stay helps support the local economy. Visitors will spend their nights under a thatched roof in a traditional hut, or fale, and the locals will share their typical fare: coconuts, taro root, bananas, fish, and pork. Hosts also teach guests about Samoan customs, crafts, and lifestyle.

Visitors are often surprised to learn that the Samoans are Christians, a result of missionary presence in the 1600s. Every Sunday, church services are performed and a day of rest is observed. Predating the arrival of the missionaries, the Samoans continue to practice traditional dance and music ceremonies. These most often take place during a fiafia (traditional Samoan meal) and may include the fire dance or knife dance.

The Samoans fish for salmon, herring, and rollmop with poles and nets. At certain times of the year, they actually catch fish between their hands in palm leaves. The fish are marinated and served raw or cooked on stones around the embers of a dying fire. The Samoans also eat octopus, which they spear as they walk along the reef, and giant clams.

The American Samoan culture delights visitors with its unique conglomoration of old ways and new. The friendly people enhance the natural splendors of the islands, making the tropical reefs more enchanting and the volcanic mountains more magnificent. A trip to American Samoa National Park is truly an unforgettable experience.