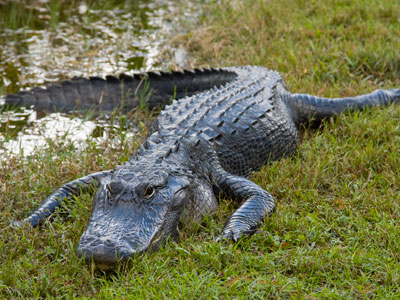 Alligators are more threatening in water than on land.
Steve Lewis/Getty Images

Much like the cheetah, the alligato­r is an incredibly fast runner. Perhaps you've seen one rise up on its long, muscular legs and sprint 500 yards (457 meters) across a wide-open field after fleeing prey.

No? You've never witnessed such a thing? What you've probably witnessed is somethi­ng like this: You're standing by a lagoon, checking out a pelican, when you notice two small bumps that protrude from the water. After you take note of the "Don't Feed the Alligators" sign, you put two and two together and decide those bumps are the eyes of said creature lazily floating in the lagoon. You're frightened for a moment, but then you remember the classic adage: You can escape an alligator if you run in a zigzag. And this brings you comfort.

But should it? This saying, which is so old and so widespread that it's virtually impossible to determine where or why it was ever started, implies a couple of things: One, it implies that an alligator is likely to chase you a long distance on land. Two, it implies that alligators can run faster than humans -- at least when they're running in a straight line.

The truth is, although alligators are frighteningly quick, they're not cheetah fast and they don't like to run long distances. It's very rare for an alligator to chase a human on dry land. And the average human could easily outrun an alligator, zigzagging or not -- it tops out at a speed of around 11 miles per hour (18 kph), and it can't maintain that speed for very long [source: San Diego Zoo].

More importantly, gaining on prey via a long sprint is not the alligator's attack tactic. The alligator prefers to sneak up on its prey in the water. It's a much faster swimmer than runner -- it can swim 20 miles per hour (32 kph) [source: San Diego Zoo]. And it's silent as it moves through water. Its eyes are set on top of its head, so it can swim while watching what's happening on the surface. It can also remain underwater for extended periods of time and hold its breath for up to one hour.

So sure, you could probably escape an alligator if you ran in a zigzag. You probably also could escape one if you ran in a straight line. But the likelihood that an alligator would ever chase you on dry land is so low that the old adage is more joke than genuine advice. It simply doesn't apply.

Why wouldn't an alligator chase you? And how would it attack you instead? Find out on the next page.

Not only are alligators not likely to chase you a long distance on dry land, they're not likely to attack you at all. ­Alligators prefer an easy meal. They're patient hunters and will stalk their prey in the water for hours before attacking. But once they attack, they don't want to do a lot of work. Prey that fights back is typically abandoned. And they don't like to attack anything they can't swallow in one gulp. Even large alligators typically choose prey that's relatively small, which is good news for adult human beings.

Small alligators make up the majority­ of the alligator population. An­ alligator that is less than 5 feet (1.5 meters) long will typically eat c­rawfish, small snakes and turtles. They don't even present a threat to small dogs. Small all­igators ­are not a threat to humans and won't attack people under normal circumstances.

Sometimes people think small alligators -- say, smaller than 3 feet (0.9 meters) -- will make a good pet. In fact, trying to capture an alligator is the most common way people get bitten by one. Even small alligators have more than 80 razor-sharp teeth. While a bite may not be life threatening, it still requires a visit to the hospital.

Large alligators are less common, but they're the greatest threat to humans because they're big enough to size us up as a legitimate meal. A full-grown alligator that is between 8 and 11 feet (2.4 and 3.4 meters) could weigh up to 1,000 pounds (453 kilograms) [source: Smithsonian National Zoological Park]. Even though these alligators are a threat to humans, they're still wary of us. Alligators would prefer to avoid interactions with people altogether. When people witness an alligator snapping its jaws and growling, they assume it's preparing to attack. In fact, this is defensive posturing.

Still not convinced that alligators don't hunt humans? Look at the numbers. There's an average of four alligator attacks in the United States each year (despite the fact that the state of Florida alone averages 12,000 complaints about the reptiles annually). Here's another number to think about: Since 1948, the Fish and Wildlife Conservation Commission has received reports of 356 alligator attacks on humans. Twenty-five of those attacks were fatal, and in nine cases it's believed that the victims were deceased before the alligators ate them for dinner.

Of course, there are exceptions to every rule, right?

­Alligators don't overturn boats to capture prey. Some people ­paddling canoes and kayaks have overturned their boats when they scrapped the back of an alligator in shallow water, but that wasn't the fault of alligator.

Alligators don't snatch people out of boats. When you see an alligator on the water's edge silently glide into the water and head toward your boat, it can be frightening. But it's not what it seems. Alligators simply are much more comfortable in water than on land, so when they're startled by a boat while sunning themselves, they instinctively head for the water 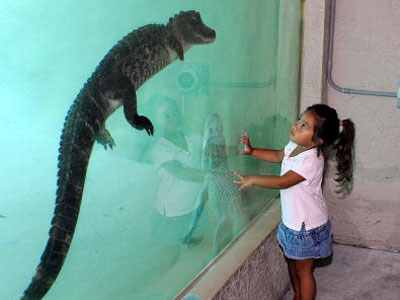 Just because alligators have no natural desire to eat us for dinner, doesn't mean we don't need to be cautious in their presence. If you live or are vacationing in alligator country, there are some ways to decrease the likelihood of an unpleasant encounter.

Many human victims of alligator attacks are small children who are wading or playing in water without adult supervision.

Alligators may attack because they're hungry, but that's not the most common reason. As humans continue to encroach on wildlife habitat, reducing the alligator's natural food sources, it's expected that these types of attacks may increase. The two main reasons that an alligator attacks a human are because it's protecting its territory or it's angry.

An adult male is territorial during mating season, which is early- to mid-summer. If he feels threatened or startled, he may attack. A female with her young may attack if she views a human as a threat to her offspring. In fact, attacks often occur when a human tries to capture or pet young alligators, not realizing that mom is nearby.

Many attacks occur as a result of people teasing or trying to capture alligators. Throwing sticks and rocks at alligators may seem harmless, but doing so creates a dangerous situation for both the person and the alligator.

Finally, if you see an alligator, get out of the water. Warn others in the area, and no matter how small the alligator is, don't attempt to pet, feed or capture it. By following these tips you shouldn't have to worry whether you'll run in a zigzag, up a tree or down a hill to avoid an alligator.

10 Disappearances in the Bermuda Triangle
How long can you go without food and water?
What natural weapons could I find in the wilderness?