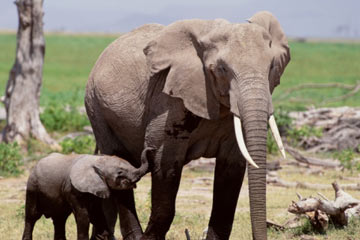 One advantage of rainy season safaris is getting a chance to take shots of cute baby animals like this elephant.
Jupiterimages/Photos.com/Thinkstock

The cost and time commitment make an African safari a once in a lifetime trip for most people, so you want to choose the best time to travel. Folks normally talk about Africa as having two "seasons" – wet and dry – though Africa does experience somewhat chilly winters as well. East Africa experiences its main rainy season from April to June, while in Southern Africa it runs from November to March [source: Eyes on Africa].

The high season is the dry season because it's more pleasant to travel without the rain, and with the absence of grassland and bush, you have a better chance at spotting the animals.

In East Africa, safaris are not usually offered during the rainy season as the roads are often closed due to poor conditions. Of course, this will depend on the tour company you use so check with them for more details.

East and Southern Africa are both south of the equator, which means the seasons are reversed from the U.S. June through August is winter – and despite Africa's reputation for being hot and dry, winter temperatures can dip down below freezing at night though they will heat up in the day [source: Eyes on Africa]. December through March is summer season.

Nevertheless, time you decide to go, you can be assured that a safari to Africa is an experience you'll forget.