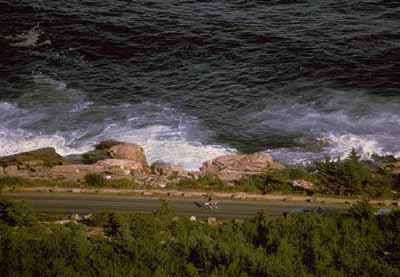 Just an hour's journey from Bangor International Airport, Acadia National Park is located off the central coast of Maine. Visitors will find plenty to do, whether they choose to absorb Acadia's history and charm at the museum, explore the lakes on a boat cruise, or wander the carriageways on foot.

Other services: A museum and two campgrounds

Both dramatic and sublime, Acadia National Park is a nearly perfect summation of the Maine coast. Completely surrounded by the sea, the park's glacier-scoured interior consists of lovely valleys, lakes, and peaks. As you might expect from a tract of land with wetlands as well as forests and mountains, Acadia houses an abundance of wildlife, including some unusual mammals, fish and birds.

Acadia National Park is a stunning coastal retreat that offers great opportunities for outdoor recreation and it’s one of the best cliff diving spots around. Check out this great cliff diving article and amazing video from Discovery’s Fearless Planet to learn more about this exciting adventure sport.

The park provides many opportunities for active learning and exploring throughout the year. Click to the next page for some sightseeing ideas. 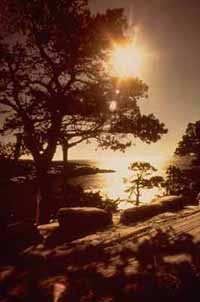 ©2006 National Park Services The beauty of Mount Desert has been depicted in both prose and paint.

Visitors can spend a morning at Acadia National Park among the tidal pools, gazing in wonder at the colorful sponges, sea anemone, starfish, and periwinkles, or they can go for an extended hike among the Canadian-like forests of white spruce and paper birch, red maple, and quaking aspen near the summit of Cadillac Mountain. At 1,530 feet, Cadillac Mountain is the highest point on the Atlantic Coast of the Americas north of Brazil. From its often breezy summit, hikers can take in a panoramic view of this wonderland of granite islands and tranquil sea.

For people looking for more solitude, Acadia offers several smaller outer islands, including Isle au Haut, about 15 miles southwest of the primary island in the park (Mount Desert). Acadia is also known for its wildlife, which includes a profusion of coastal bird-life, such as great blue herons and gulls, warblers and juncos, ospreys and eagles, guillemots and terns. Master wildlife photographer Eliot Porter was known to spend hours stalking the birds of Acadia. Marine mammals include harbor and gray seals, porpoises, and finback whales.

Acadia National Park offers picturesque panoramas sculpted by the unrelenting sea over thousands of years. To capture this beauty on film, try one of these vantage points:

Now that you've read about the must-see sights of Acadia, let's back up and examine how these amazing mountains and lakes came to be. On the next page, learn about the glaciers that carved out rock formations and the explorers who discovered them. 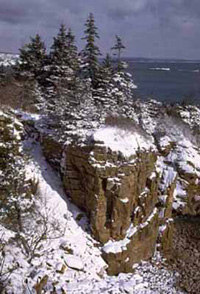 As you take in the beauty of Acadia National Park, it's natural to ask how this piece of land was formed. Approximately two millennia ago, Mount Desert Island sat atop a steep granite ridge on the edge of the North American continental mainland.

When enormous sheets of ice -- some of them close to two miles thick -- advanced from the north, glaciers flowed over the tops of the coastal mountains. When the great glaciers moved, they smoothed the tops of the mountains, scraping out large pits that later became lakes, at the same time gouging out valleys and passes through the mountains.

The glaciers began melting as the earth's atmosphere warmed. The corresponding rise in the level of the oceans flooded many of the coastal valleys, creating inlets and harbors and also cutting off sections of the shoreline from the mainland. A glance at the map makes it easy to see that Mount Desert Island was formed this way. Its lake-studded, mountainous interior is a testimony to the work of ice thousands of years ago.

The park is in a region that was once a French colonial territory called La Cadie. The area was first explored in 1604 by Samuel de Champlain. His ship crashed into a shoal off the coast and required extensive repairs. While Champlain's party was stranded, he led them ashore to explore the interior.

There he encountered people from the Abnaki tribe who lived on the island during the summer. Because of its hills, mountains, and rugged coast, they called it Pemetic, "the sloping land." Champlain renamed the pristine island, blessed with forests, lakes, and mountains, L'Isle des Monts Deserts, or "island of desert mountains," because from the sea it looked barren and wasted.

Interested mainly in the island's beavers because their pelts drew high prices in Europe, Champlain returned to France with wondrous tales. A French mission was established there a few years later. Following a century and a half of war between the French and British over control of the New World, the island finally fell into the hands of the English in 1759, just 17 years before the American Revolution.

During the late-nineteenth and early-twentieth centuries, a number of millionaires, including John D. Rockefeller, began spending their summers exploring Mount Desert Island. By 1917, Rockefeller became convinced that the rapidly proliferating automobile would soon destroy the island's natural beauty and serenity, so he undertook the construction of an elaborate network of gravel paths. The roadways were for horse-drawn carriages only.

Automobiles were not allowed on the 57 miles of paths and 17 granite bridges, each exquisitely built by hand. Later, Rockefeller donated the about 44 miles of the paths, the bridges, and 11,000 acres of his own land to Acadia National Park.

Today, the park occupies about half the island, as well as several smaller islands. Private estates and charming coastal villages comprise the rest of Mount Desert Island. Rockefeller's carriageways are still in use and still not open to automobiles. Today they provide an easy, civilized, and inviting route into the park for walkers, horseback riders, bicyclists, joggers, and, in winter, cross-country skiers.

Thanks to the foresight and generosity of people like Rockefeller and George Dorr, the park's initial superintendent, Acadia National Park became the first national park established east of the Mississippi. It is a wilderness treasure that everyone can enjoy.