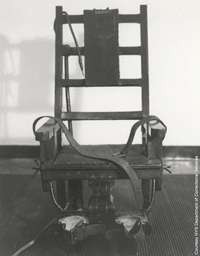 A replica electric chair is a highlight of the Sing Sing Prison Museum.
Publications International, Ltd.

When you visit Paris' Louvre, New York City's Metropolitan Museum of Art or Washington's Smithsonian, you're at least vaguely aware of what you'll spy when you wander the echoing museum halls. The insides of these places look predictable enough -- Impressionist art, stoic security guards, a gift shop that sells space food. But some of the most mind-spinning exhibits in the United States have nothing to do with air and space or the Mona Lisa.

They say art is in the eye of the beholder. So we can thank the respective beholders for assembling these six unique collections. In fact, that's what's so mind-blowing about these museums -- who would've ever thought to collect this stuff? Take, for example, Liberace's jeweled grand piano or the corroded lung of a coal miner. And who wouldn't want to see the hatchet used by a murderer and even sleep in the house where the killings took place? Sounds like a relaxing stay.

Click through our list of six to find out what other bizarre things you'll see at these fringe musuems.