Browse the article 5 Treasures People Are Looking for Right Now 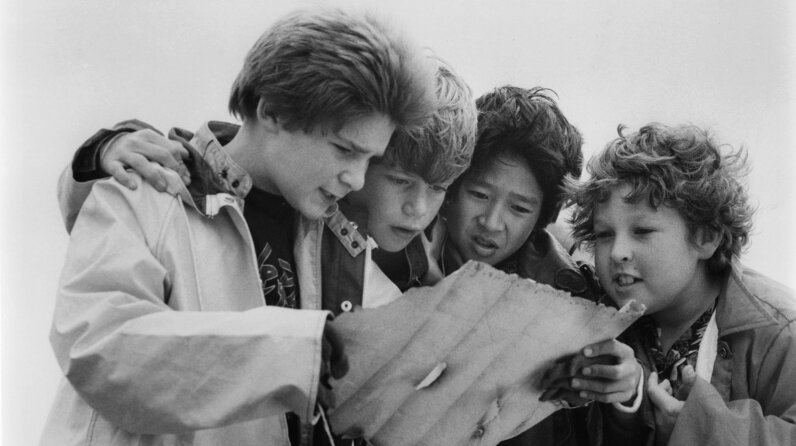 If the Goonies can find the treasure, why can't you? Warner Brothers/Getty Images

When Jim Hawkins finally discovers the gold he's been tracking down in Robert Louis Stevenson's "Treasure Island," the moment should be a triumphant one. But instead of cheering or gloating, the boy spares a thought for all the men who've died looking for the riches he now beholds.

There's no doubt about it: Treasure hunting can be a dangerous pastime. Yet for many people, the romance is worth the risk. Humans have an innate desire for personal glory. Treasure hunts not only feed that impulse but also combine it with the thrill of adventure and the exotic allure of bygone worlds.

Because people affix value to so many different things, treasures come in all shapes and sizes. A missing fossil or a long-lost painting might be just as precious as a sunken chest of gold — if not more so. The five treasures we'll look at in this article tell astonishing stories. At least three of them were stolen outright. One's been missing since the first century C.E. And another was hidden by an eccentric, poem-writing millionaire.

Now just so you know, a lot of people have spent a lot of time looking for every single item on this list. Anyone who tries to find these things will have plenty of company. Hey, the competition should make the game more interesting ... right? 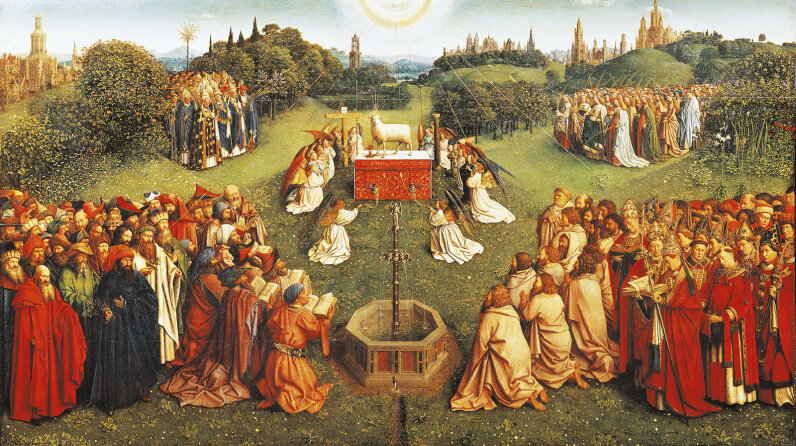 A detail from Huber and Jan van Eyck's storied and partially stolen 1432 painting "Adoration of the Mystic Lamb." DeAgostini/Getty Images

Few paintings are as celebrated as the "Adoration of the Mystic Lamb." Sometimes known as the "Ghent Altarpiece," it was made by the Flemish artist Hubert van Eyck and his brother Jan, whom history's nicknamed "The Father of Oil Painting." Their masterwork is a composite of 12 separate panels. Upon these, the Eycks reproduced — with amazing detail — an ensemble of Christian figures. Completed in 1432, the piece was displayed inside the St. Bavo's Cathedral in Ghent, Belgium.

The "Ghent Altarpiece" has gone through a lot over the past half-millennium or so. We don't have the space to mention all of its adventures, but you may be interested to learn that the painting kickstarted the Northern Renaissance, got mixed up in a religious standoff and enjoyed a more than 1 million-euro restoration effort starting in 2012.

The lower left segment of the "Ghent Altarpiece" goes by two names: "The Righteous Judges" panel and "The Just Judges" panel. It features a group of stern-looking horse-riders — including two figures who might be self-portraits of the van Eycks.

During the night of April 10,1934, thieves broke into St. Bavo's and stole two panels. One, named after John the Baptist, was found within the year. The other lifted panel was "The Righteous Judges," which is still missing today. A ransom note was issued to the church, but the demanded sum was never paid in full, so the criminals didn't come forward. In 1945, a copy was put on display in the original's place. All these decades later, we still have no idea where the real "Righteous Judges" panel is — despite many attempts to hunt it down. (Even Joseph Goebbels tried in vain to locate the missing prize.) 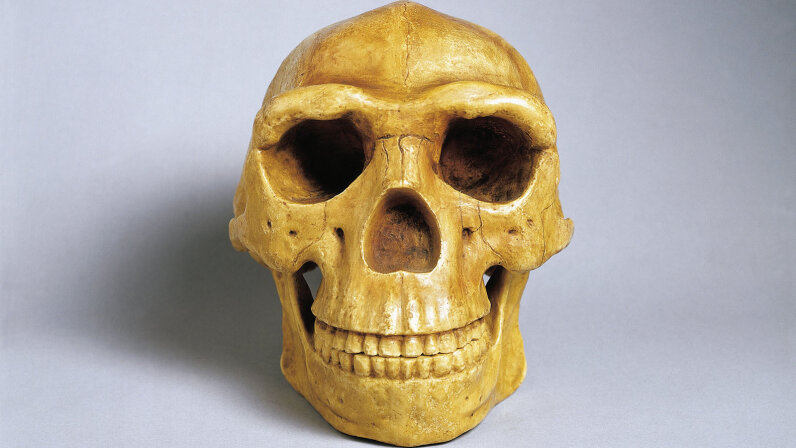 This reconstruction of Peking Man's skull was made by German anthropologist Franz Weidenreich. It's lucky he did, because Peking Man's original remains have been lost for decades. DEA/L. DE MASI/De Agostini/Getty Images

In the chaos of wartime, valuable artworks often go missing. But under these turbulent circumstances, scientific treasures can disappear, too.

The modern saga of the Peking Man began in 1921, when Swedish archaeologist Johan Gunnar Andersson learned about a fossil-rich site near the mining town of Zhoukoudian. (This spot is located roughly 26 miles — or 42 kilometers — southwest of central Beijing.) Four years later, some material that his colleague Otto Zdansky had recovered there were identified as the teeth of a human-like creature, or "hominid."

Zhoukoudian turned out to be a hotbed for hominid fossils. During the 1920s and 1930s, archaeologists dug up numerous teeth, some lower skeleton bones, 11 lower jaws and components of 14 different craniums. We now know that these came from the species Homo erectus, but at the time, scientists thought they represented a never-before-seen primate. Informally, these researchers called it the "Peking Man."

Before 1941, the fossils were housed at the Peking Union Medical College Hospital. During their stay, German anthropologist Franz Weidenreich had the foresight to make casts of several bones. It's a good thing he did.

Worried that the Japanese would soon conquer Beijing, China got in touch with the American Museum of Natural History in New York City. The Manhattan staff agreed to hold onto the Peking Man bones for temporary safekeeping until the war ended. But after the fossils were loaded up into crates in December 1941, they disappeared.

In losing the Peking Man remains, the Chinese people lost a national treasure. Theories on the fossils' whereabouts are a dime a dozen. Some believe the bones now reside in Japan, others think they made it to the states before going AWOL and still others believe they were buried under a parking lot in Qinhuangdao.

The Lost Menorah of the Second Temple 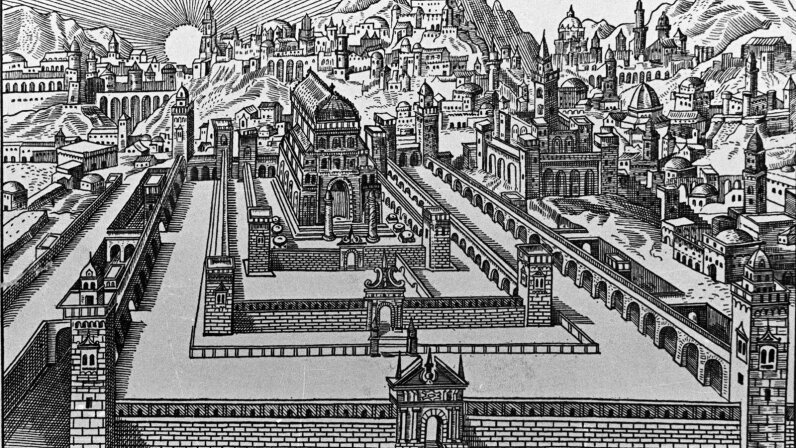 This woodcut depicts the outside of Solomon's Temple, or First Temple in Jerusalem, which was thought to be the home of the Ark of the Covenant. Bettmann/Getty Images

The Temple of Solomon in ancient Jerusalem was destroyed by the Babylonians in the year 586 B.C.E. It's said that the Ark of the Covenant, a chest containing the stone tablets Moses brought down from Mount Sinai, resided in this place of worship before the invasion. The question of what happened to the Ark is one of the biggest mysteries in biblical archaeology. But the Second Temple of Jerusalem has its own missing treasure story.

In about 513 B.C.E, a replacement for Solomon's Temple was constructed by the residents of Jerusalem. It would go through numerous upgrades and expansions, the best-known of which happened on King Herod I's watch.

Like its predecessor, this Second Temple was also demolished by an outside force. A Jewish rebellion broke out in the year 66 C.E. Once the uprising had been quelled, the Romans reclaimed Jerusalem and knocked down the Second Temple in 70 C.E. All that remains standing is a portion of the Western Wall, which is now considered a sacred place and a pilgrimage site for those in the Jewish faith.

Before the temple fell, a golden, seven-branched menorah was kept inside. Seized by the Romans in 70 C.E, its current resting place hasn't been identified. Maybe the Visigoths stole it while sacking Rome in 410 C.E. Or perhaps the menorah journeyed to Carthage (present-day Tunisia.) A popular — and unverified — belief is that the Vatican's been hiding it this whole time. We may never get a definite answer. 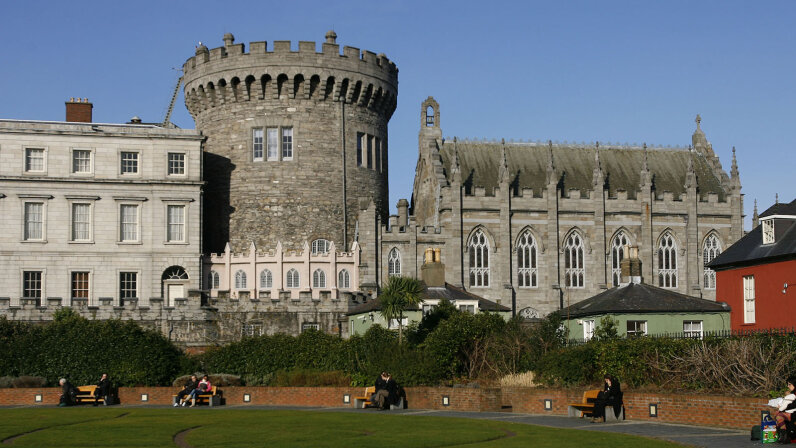 At the Garda Museum in Dublin Castle visitors can see the safe that once housed the Irish crown jewels, but not the jewels themselves, which were stolen long ago. PETER MUHLY/AFP/Getty Images

This yarn has it all: Political tension, murder and a rumored sex scandal. Let's begin at the beginning, shall we? In 1760, George III became the king of both Ireland and Great Britain. Twenty-three years into his reign, he established an order of knighthood for his Irish subjects.

Such groups need props for their initiation ceremonies. In 1831, King William IV had a grandmaster pendant and an oval badge created on the order's behalf. These were made from precious objects from Queen Charlotte's old jewelry collection. The pendant contained 400 of her old diamonds arranged in an eight-pointed star along with a ruby cross and an emerald shamrock set on enamel. The badge featured all of those precious materials, as well as some 24-karat gold.

Both items were left in the care of Sir Arthur Vicars, who kept them under lock and key at Dublin Castle. On July 6,1907, it was discovered that they'd been stolen. And to make matters worse, King Edward VII was scheduled to visit Dublin four days later.

The disappearance of the jewels cost Vicars his position. Death claimed him in 1921, when he was assassinated in his wife's presence by members of the Irish Republican Army. Did he have a hand in stealing the crown jewels? Maybe, maybe not. Some believe that the mastermind of this crime was Francis Shackleton, who'd been an assistant of Vicars' at Dublin Castle. There's a rumor that Shackleton also was having an affair with Edward VII's brother-in-law. 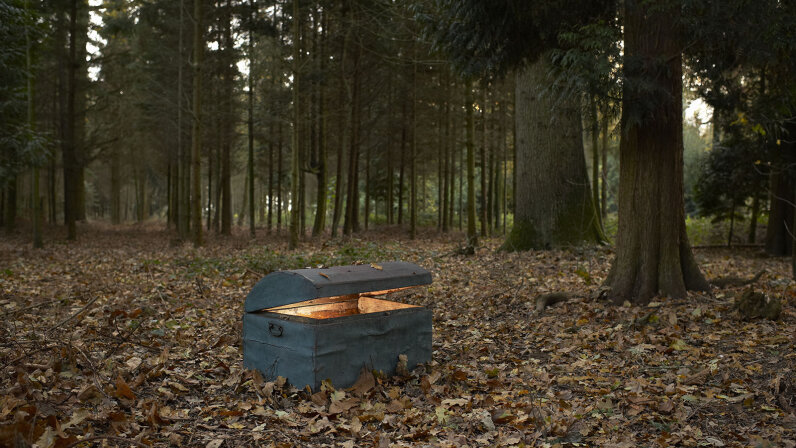 A real-life treasure chest stuffed full of gold coins and nuggets is rumored to be hiding somewhere in the Rockies, courtesy of one Forrest Fenn. Dougal Waters/DigitalVision/Getty Images

Rare is the treasure that somebody went out and hid just for the fun of it. Right at this very moment, Americans of every background are trying to find a king's ransom in the Rocky Mountains. Most of them won't succeed; no one has thus far. Still, a few explorers have come tantalizingly close to the bounty that they seek without even knowing it.

Forrest Fenn is a millionaire Vietnam veteran and a dealer of artifacts. In 1988, he was diagnosed with kidney cancer and told his days were numbered. However, Fenn didn't go gently into that good night. He's still alive and well today, but the cancer scare inspired him to do something rather outlandish.

In 2010, Fenn filled a bronze chest with hundreds of golden coins and nuggets. Altogether, the items are worth between $1 million and $5 million. He then proceeded to hide the loot somewhere in the Rockies.

Clues regarding the chest's location were hidden within a cryptic poem in "The Thrill of the Chase," Fenn's self-published memoir. Once the book came out, it was off to the races. In an interview with ABC's "Nightline," Fenn guessed that roughly 350,000 people have gone looking for the treasure. And in 2017, he acknowledged some close calls. At a presentation in the Santa Fe Center for Contemporary Arts, Fenn said that a few participants in the hunt unwittingly ventured within 200 feet (61 meters) of the chest.

He insists that the treasure isn't hiding in a dangerous spot. Nevertheless, at least four explorers have died while pursuing it. Last year, the New Mexico State Police chief asked him to call the whole thing off. As of right now though, the booty's still at large.