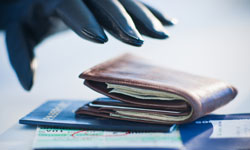 If you keep your wits about you, you'll slap away this gloved hand when it gets near your passport. See more pictures of money scams.
Tom Grill/Getty Images

Your passport is fresh and awaiting new stamps. Your bags are packed. You've put a hold on your mail, arranged for someone to water your plants and picked up a set of travel-sized toiletries for your carry-on. You're definitely ready to travel. Maybe you're looking forward to eating exotic cuisine, adventures in foreign countries, visits to historical landmarks.

You're probably not, however, expecting to be the victim of a tourist scam.

In 2008, more than 25 million Americans traveled overseas. To a seasoned scam artist, that's a lot of potential victims! The best way to avoid falling victim to a crime is to use your head. Be aware of your surroundings, trust your gut, take appropriate precautions and keep your wits about you. Traveling is supposed to be fun. Going on vacation doesn't have to be a scary or paranoia-inducing experience. The idea is to travel smart and know what (or who) to avoid. So let's get you acquainted with some of world's most common cons.

In any country, police personnel are supposed to be on your side. However, it's also easy for scam artists to pose as police -- and use that implied authority to take your money. Here's how they do it.

Most swindles take place in any popular tourist destination. If you're a tourist, you're probably not familiar with the typical law enforcement uniforms, so it's easy for anyone to put on something that looks official. In this scam, a person claiming to be a police officer approaches you. He will tell you there's been a problem in the area with counterfeit bills and ask to check your wallet for any offending currency -- all under the pretense of "protecting" you.

The fake police officer will then rifle through your wallet, giving it back to you with an "all clear." He'll be long gone by the time you realize some of your money is missing. Variations on this scam include fake authorities at train stations, roadblocks and other official sites. Sometimes they'll just grab your wallet or passport and run.

How do you avoid falling victim? Don't voluntarily hand your wallet or passport over to anyone, ever. Know what the area's law enforcement uniform looks like. Ask for identification numbers and names if in doubt about someone's identity.

You can get scammed before you even pack a bag. Many people have fallen victim to the "You've won a free trip to Florida!" phone call trick. A salesperson tells you you've won a trip to Florida or the Bahamas, and asks for a credit card number for verification. Your card is charged, but you never hear from the company again. Remember -- if it sounds too good to be true, it probably is.

Create a Distraction, Steal Your Wallet

So many variations on this scam exist, we can't even list them all! But here's the gist -- someone creates a distraction, and someone else steals your wallet.

Pickpockets often work in teams. Here's one scam that's popular in Europe: While you're walking down the street minding your own business, a pretty woman arguing with a street vendor captures your attention. Her argument with the vendor, who is accusing her of stealing, escalates until a crowd gathers. Sometimes the woman will even start to take off her clothes to prove her innocence! While you and everyone else stand there gaping, her accomplice is working his way through the crowd, relieving people of their wallets and valuables.

Other methods of distraction? Someone will "accidentally" spill something on you. Or someone will point out bird poop on the back of your shirt and offer to clean it off. A group of children will surround you, begging for money or food. An elderly woman will fall down in front of you. Some people even report a person shoving a baby at you, stealing your valuables when you instinctively reach out for the child [source: IMEX].

How do you avoid falling victim? It's unfortunate that many thieves and scammers rely on your sense of humanity in order to steal money from you. Anywhere there's a crowd or scene, you're a potential victim. So be smart -- don't walk around with an open bag and don't keep your wallet in your back pocket. Keep your bag slung around you so it can't be snatched. Wear a pouch or smaller bag under your clothes.

Many crooks like to take advantage of your unfamiliarity with the currency of the country you're visiting. One common scam is called the "slow count." In busy tourist areas, some cashiers will count out your change very slowly, with confusing pauses, in the hopes you'll just take what they're holding out to you and leave. Usually the amount in their hand is way less than what you should have received.

When you do receive change, inspect it before leaving the premises. In Italy, for example, the old 500-lira coins look a lot like their 2-euro coins. The difference? The 500-lira coins are worthless. Also, try to avoid paying for anything with a large bill. Some cab drivers or cashiers will insist that you mistakenly gave them a one when you've actually handed them much more.

When you arrive at your travel destination, you'll want to change your money over to the local currency. You may notice people on the street or in the airport offering excellent conversion rates, better than the hotel or local bureau. But this isn't the time to bargain hunt. Often these black market exchanges will leave you with a pile of fake money or a bunch of newspaper wedged between two actual pieces of money.

How do you avoid falling victim? Learn what the currency in the city you're visiting looks like. Count your change carefully. Exchange money at authorized centers only. Pay with small bills.

Don't Judge a Book by Its Cover

Many of today's pickpockets are well dressed and affluent in appearance. They blend in nicely at fancy hotels and expensive restaurants, and rely on the fact that you'll be letting down your guard in these sort of establishments.

It's quite easy for cabbies to swindle money out of an unsuspecting tourist. They prey off your being a stranger in a strange land.

Again, it's important to be knowledgeable about the local currency. If you hand a cabbie a large bill, he may drop it and then pick up a hidden smaller bill, insisting you didn't pay enough. Some will charge higher nights and weekend rates on the meter during a weekday. Some might quote you one fare and charge you double once you arrive at your destination.

Some cabbies work in tandem with local hotels, offering you a "package deal" right at the airport. However, once you arrive at the hotel, you find the discounted rooms mysteriously all filled up. The hotel then charges you an exorbitant amount to stay, and the cabbie receives a commission on the side.

It also pays to have a working knowledge of where you're headed. If you know the route to your hotel should only be 15 minutes, make sure the cabbie knows you know this. Don't let yourself be talked into alternate routes or "shortcuts" that could end up lasting 45 minutes or more.

How do you avoid falling victim? Make your travel and lodging plans in advance. If you need a taxi, use a hotel or restaurant to call for one. If hailing a cab on the street, choose only those with prominent logos and telephone numbers. Never accept a ride from an unmarked car -- you could end up losing more than just your wallet. 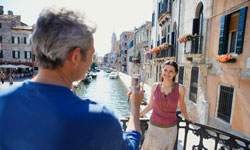 While you steal a shot of your wife in Venice, a pickpocket could be stealing your wallet.
Jeremy Maude/Getty Images

A good Samaritan is a person who goes out of his or her way to assist a fellow human being. When you're traveling in an unfamiliar country, you might hope for a good Samaritan to help you find your way. Unfortunately, however, some "good Samaritans" are actually con artists in disguise.

Some people will offer to "help" you use an ATM. Beware -- they're only trying to get your PIN code. Or, some thieves set a "trap" in the ATM that will cause it to eat your card. Ensure there is nothing sticking out of the card slot at any ATM before you use it. There could be a mechanism to steal your card.

Others will hang around at train stations and ask if you need assistance purchasing a ticket -- then take your money and run. You should also be wary of people at train stations who offer to show you to your seat. When you get there, they will demand payment.

While driving, a car may pull up next to you and the driver will helpfully point out that you have a flat tire. While one person assists you in changing the tire, an accomplice will help himself to your pocketbook or any other valuables. Oftentimes, the people that flag you down are the people that punctured your tire to begin with.

In Spain, there's a popular scam where an older woman offers you a sprig of rosemary, as a sign of friendship. Then she'll grab your hand, read your fortune and demand payment.

How do you avoid falling victim? Don't make eye contact or accept anything that's handed to you. Purchase any tickets yourself. If you need assistance, utilize the concierge at a hotel. Never let anyone help you out at an ATM, and never give anyone your PIN.