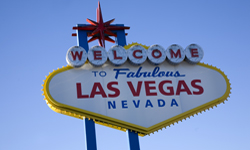 We've all seen them, and most of us have been helpless to their allure at one point or another -- the tourist trap. The idea of a tourist trap is to get hapless tourists to visit a well-known attraction, mainly for the purpose of taking their money. It's not a tourist trap unless there are multiple gift shops and you can purchase both a shot glass and a back scratcher with the destination printed on it. What constitutes a tourist trap is open to debate, though. Italians may consider the Leaning Tower of Pisa to be a tourist trap, and there are plenty of pictures of visitors pretending to hold the tower up to make their point. Others might argue that it's history worth seeing.

The same can be said for places like Fisherman's Wharf in San Francisco or Times Square in New York. Both of these well-known attractions are mobbed with tourists eager to pay $10 for a bowl of "authentic" clam chowder or purchase an "I heart New York" T-shirt that will fall apart after three washings. But again, some might say that you can't visit New York or San Francisco without stopping by these places, even if you refuse to support the gift shops. Another telltale sign is if locals tend to avoid these spots like the plague.

What constitutes "tacky" is even more open for debate. One man's tacky is another man's must-see destination. We here at HowStuffWorks.com have scoured the world and attempted to narrow down what may be the top five tackiest tourist traps. Visit at your own risk and get ready to leave with a shot glass in hand. 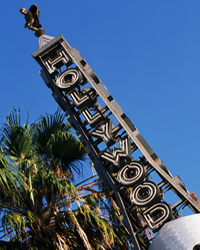 Meet me at the corner of Hollywood and Vine -- so we can go somewhere else more interesting.
Hisham Ibrahim/Getty Images

Visitors to Los Angeles have plenty of options. Traditional tourists will no doubt pay a visit to Venice Beach, Griffith Observatory and the ultimate tourist trap -- Hollywood Boulevard. This famous street in the heart of Hollywood once shined with glitz and glamour. Today it's overrun with odd smells, panhandlers and tacky gift shops. There has been a big effort in recent years to clean Hollywood up, with some measure of success. The Hollywood and Highland complex is shiny and new and home to the Academy Awards, and other new complexes in central Hollywood offer up better shopping and dining options than in the recent past. But no one will argue that Hollywood Boulevard has seen its best days.

If you're into tacky, head down to the area around the famous Grauman's Chinese Theater. You can take a peek at the Hollywood Wax Museum or the Ripley's Believe It Or Not! Museum -- both across the street from Grauman's. Not to be outdone, the world-famous Madam Tussauds Wax Museum is opening a massive 44,000-square-foot (4,087-square-meter) Hollywood location in fall 2009. If that doesn't do it for you, visit one of the dozens of over-loaded gift shops for a miniature Oscar Award or pay five bucks for a Polaroid of you and a dude in a Darth Vader costume. Also check out the famous corner of Hollywood and Vine, just to verify that not much goes on there now. And remember to keep your head down on the sidewalk to see which legendary performer's star you're treading on with the Walk of Fame. 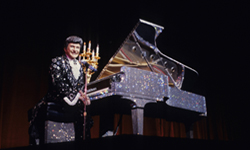 Just one of Liberace's many custom pianos.
Larry Busacca/Getty Images

When it comes to tacky towns, Las Vegas, Nev., may take the cake. The town is the definition of a tourist trap -- built in the middle of nowhere for the sole purpose of taking money from tourists. Vegas is known for colorful hotels and loud, packed casinos with unusual themes. In recent years, the gambling mecca has tried to steer away from these themed casinos that dominated the landscape in the 1980s and 1990s, but it still holds a tacky allure.

Enter Liberace, an entertainer that prided himself on loud, outrageous costumes and an extravagant, garish home life. The famous piano player once referred to himself as a "One-man Disneyland." Put Vegas and Liberace together and you have the makings of one tacky museum, which is kind of the whole point. For $15 you can see 18 of his famously decorated pianos, as well as some of the over-the-top wardrobe of the world-famous entertainer -- including the 200-pound (90-kilogram) "King Neptune" outfit. His jewelry collection and some of his luxury cars are also on display. Just one word to the wise, if you have an aversion to sequins, you might be better off avoiding the Liberace museum. 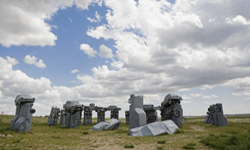 Carhenge! Where the Chevys live, and they do live well.
Philip Nealey/Getty Images

What better way to show your tacky stripes than to erect a pseudo-replica of a famous historical landmark for all to see? There must be something about Stonehenge, the famous prehistoric monument located on the English countryside. There are no fewer than a half dozen tributes to the real thing located across the United States. If you're near Maryhill, Wash., you can visit the first and perhaps most accurate of these replicas. The reinforced concrete structure is built to scale and was originally christened as a tribute to the fallen soldiers of World War I in 1930.

Then there's "Carhenge" -- a Stonehenge homage made from 38 junked cars and trucks. Each vehicle in this Alliance, Neb., monument is painted flat gray to match the real thing. Farmer Jim Reinders built it as a tribute to his father, and although some citizens wanted it torn down, it still stands. Retired oilman Al Shepperd of Kerrville, Texas, built a 60-percent-scale Stonehenge replica on his land after considering a pyramid and a fake UFO crash site. To spice things up, Shepperd also has a couple of Easter Island statue replicas. Finally, we have "Stonefridge," a replica in Santa Fe, N.M., that's made of, you guessed it, old refrigerators. Artist Adam Horowitz spent nine years erecting the tribute on an abandoned landfill. Horowitz broke tradition with the other Stonehenge replica builders by not sticking to the original specifications. What he ended up with was 200-plus refrigerators stacked 18 feet (5.4 meters) high in a semicircle with separate fridge towers in the center. 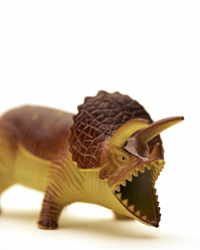 Imagine this beast in life-size form, and you have a pretty good idea what Dinosaur World is all about.
ballyscanlon/Getty Images

What's better than a dinosaur-themed fun park? Three dinosaur-themed fun parks. If you're in Texas, Kentucky or Florida, you can pay a visit to Dinosaur World, where replicas of prehistoric creatures stand there for paying customers to look at. If you go expecting cool animatronics, you'll be disappointed. These dino-replicas are frozen in time and set along a wooded trail. If the thought of looking at dinosaur statues doesn't thrill you, you can always take part in the "fossil dig." The folks who run Dinosaur World plant various treats in a sandbox for kids to dig up. Sharks teeth, sea urchins and eight more real fossils are free for the taking for kids ages three to 12. Adults can "dig" for an extra two dollars.

The good news about Dinosaur World is that it's relatively inexpensive. Adult admission is $12.75, and kids under 12 pay only $9.75. You can celebrate your birthday if you want to host a party at Dinosaur World, but don't expect a catered meal with cake. There is no food at the park, but you can bring your own or have pizza delivered to the picnic area. And like all tourist traps, there is a gift shop. The park's Web site even advises that the T. Rex is the king of the gift shop, with more toys and souvenirs dedicated to the carnivore than any other dinosaur.

South of the Border 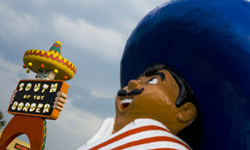 Pedro says, "Hola, would you like to buy some fireworks?"
Jeff Hutchens/Getty Images

The mother of all tacky tourist traps is pretty hard to miss if you're traveling along Interstate 95 on the East Coast of the United States. Coming from either direction, you'll see no less than 100 different billboards starting about 200 miles (321 kilometers) away from this glorified rest area. The Mexican-themed stopover is the brainchild of Alan Schafer. The story goes like this -- he owned a roadside beer stand and noticed supplies for his venture were being delivered to "Schafer Project: South of the Border." Of course, they were talking about the border of South and North Carolinas, where the famous tourist traps sits today, but that didn't stop Schafer from being blinded by a blast of inspiration. He started importing Mexican souvenirs, and South of the Border (SOB) was born.

Visit one of two massive gift shops and choose from eight official SOB backscratchers or 22 styles of coffee mug. Purchase legal fireworks or get married in the Pleasure Dome wedding chapel. There are multiple restaurants, motels and an RV campgrounds if you choose to stay overnight at the 135 acre site. The centerpiece of this tourist trap is Sombrero Tower, which looms nearly 200 feet (61 meters) above SOB like some kind of Mexican space needle. Pay only one dollar to take a ride up the tower in an elevator where you can survey the forestland of Dillon County, S.C. At the end of the day, wash it all down with a margarita and a burrito, and then resume your trip to Florida.