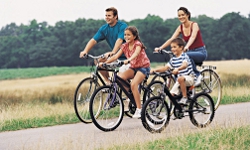 Bicycling can be a great way for the family to enjoy a vacation.
Digital Vision/Thinkstock

Taking a trip soon? Don't spend all of your time enjoying the sights from your car or a tour bus. Hop on a bike instead. As you pedal your way around a new town, or through picturesque countryside, you'll be able to hear, smell and even touch things, allowing you to truly experience your surroundings. And hey, all that riding is good for your health, too.

Today, people all over the world are discovering the joys of touring by bike. In the United Kingdom, for example, the number of bicycle holidays rose 30 percent from 2005 to 2007 [source: You Claim]. And cycling trip operators all over the globe are reporting increased interest. Even tiny Armenia has researched cycling vacations as a potential source of tourism [source: Business Support Center].

Don't worry that cycling while on vacation may be a hassle. It's actually a snap. Just strap your bike onto your car and bring it along. Or rent one at your destination. If you don't want to figure out a cycling route, sign on with a tour operator. Most offer everything from easy, half-day spins around town to strenuous, week-long rides covering hundreds of miles.

Starting to get excited about biking around a beautiful, new locale? Here are five really sweet one-day rides to whet your appetite. 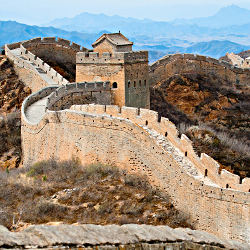 You can take a cycling day trip along the Great Wall of China for a scenic view of an amazing historical landmark.
Digital Vision/Thinkstock

No, that's not an erroneous heading. You can actually bike along the Great Wall of China, one of the world's great wonders and a UNESCO World Heritage Site. The Great Wall sprawls 5,500 miles (8,851 kilometers) across China, running east to west through forests, national parks and deserts [source: Travel China Guide]. Constructed mainly of brick and stone over a 2,000-year stretch from about 476 B.C. to 1644, the portions that remain today are mostly from the Ming Dynasty (1368 to 1644) [sources: UNESCO, Selinsky]. Unfortunately, thanks to the forces of Mother Nature and destructive humans, less than 30 percent of this magnificent structure is in good condition today [source: Travel China Guide]. So if you want to bike the wall, you'd better start planning.

Dozens of companies offer tours, typically in the spring and fall. Touring outfit Cycle China offers a one-day ride for about $100 per person. After being shuttled out of Beijing and into the country, you'll pedal along a lightly-trafficked, paved road. Soon the wall will loom into view. When you reach this historic structure, you'll park your bikes and climb on top for killer views and loads of history. Total cycling distance: about 19 to 25 miles (30 to 40 kilometers) [source: Cycle China]. 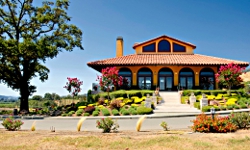 If you love fine wine and beautiful scenery, a cycling trip in Sonoma County, Calif., might be the perfect vacation.
iStockphoto/Thinkstock

More than a half-dozen bike operators run tours through the picturesque grapevine-smothered hills of Sonoma County. You can easily rent some wheels and pedal from winery to winery on your own, or sign on for any number of day trips.

More serious cyclists can sign on for Getaway Adventures' Velo 'n Vino tour. First, you'll ride 30 to 35 miles (48 to 56 kilometers) through the lush vineyards of the Dry Creek Valley, eventually rolling into Asti, a historic town that hosts a "Tour de Vine" ride in fall. Then, it's back in the saddle to roll through the equally scenic Alexander Valley of northern Sonoma County, home to more than 40 wineries, before arriving in Healdsburg, where you ditch your bike and go winery-hopping by van the rest of the afternoon [sources: Getaway Adventures, Alexander Valley, Asti Tour de Vine]. 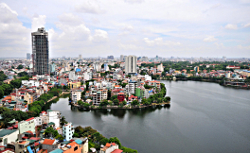 Vietnam is growing in fame as a place for tourists to cycle. The most popular trip starts near Hanoi.
iStockphoto/Thinkstock

Vietnam is increasingly popular as a tourist destination, especially among cyclists. A prime spot to pedal is along National Highway 1, which runs from the narrow, S-shaped country's northern reaches near Hanoi, along the South China Sea coastline and down to its southern tip around Ho Chi Minh City. Despite its length (about 1,000 miles, or 1,609 kilometers), it's the most popular cycling route in the country. Riders enjoy prime views of the sea, of course, plus glimpses of pine mountains, lush rice fields and numerous quaint towns [source: Lonely Planet].

Obviously, you can't cycle 1,000 miles in a day. So if you've only got 24 hours, head to Ninh Binh, about 60 miles (97 kilometers) south of Hanoi. Right on Highway 1, the town sits amidst exceptionally pretty countryside, and the riding's relatively flat, too. Or sign on with a touring company like Phat Tire Ventures, which will shuttle you uphill to Dalat in the Central Highlands, about 186 miles (300 kilometers) northeast of Ho Chi Minh City. Once there, you'll basically point your bike back down the road and coast down, enjoying the area's famous pine-forested hills, pristine lakes and jungle-blanketed valleys [sources: Lane, Phat Tire Ventures]. 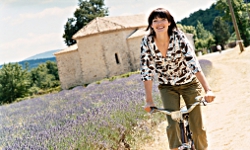 A cycling trip in Provence is a good way to see the beautiful French countryside.
Digital Vision/Thinkstock

Ah, Provence. You're in love with this one already, aren't you? This storied region of southeastern France is known for its stunning, picturesque countryside and generally moderate temps. In the Luberon area, you'll be cycling through pretty hilltop villages overlooking verdant agricultural fields below; several hundred miles' worth of signed bike paths making it a snap to navigate [source: Lonely Planet]. In Provence's heartland near the Rhone River, you'll find flat farmland studded with the impressive remains of ancient Roman arenas, theaters and monuments [sources: The Guardian, Bicycle Touring Guide].

If you're intimidated by hills and traffic, don't worry. Much of the terrain is fairly bikeable, featuring small slopes and rolling hills. And you'll mainly be pedaling along side roads and small highways with only a hint of traffic. Of course, if you want more of a challenge, Provence can dish that up, too. Head for any of the ascents up the Plateau de Sault or, if you've really got a lot of moxy, try the massive, windy Mont Ventoux, probably the second most famous climb in the storied Tour de France, after the Alpe d'Huez [sources: The Guardian, Bicycle Touring Guide, Grenoble Cycling]. 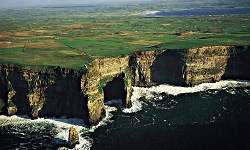 A cycling vacation in County Clare may take you along the amazing Cliffs of Moher.
Digital Vision/Thinkstock

Ride among a wide variety of landscape in southwestern Ireland, starting with the fertile lowlands along the Shannon estuary. As you fly northward, passing sandy beaches, you'll see the impressive Cliffs of Moher. One of Ireland's top visitor attractions, the cliffs stretch 702 feet (214 meters) skyward and sprawl 5 miles (8 kilometers) along the Atlantic Ocean. The Cliffs of Moher are both a UNESCO Geo Park and a European Union Special Protection Area (SPA) for birds, as they're home to one of Ireland's major colonies of cliff-nesting seabirds. They're also classified a European Union Refuge for Fauna [sources: Lonely Planet, Cliffs of Moher].

From here, cycle up to the Burren. A rather barren, rocky, limestone expanse, it's actually considered "fertile rock," because tufts of grass and other vegetation manage to sprout out from small, scattered pockets of earth. Wildflowers such as gentians and orchids also proliferate in May and June. The Burren's desolate landscape is a result of glaciation; it's considered one of the world's best examples of Glacio-Karst landscape [sources: Burren National Park, Lonely Planet]. Burren National Park is located in the Burren's southeastern side.

I've cycled through wine-soaked Sonoma County, in stunning British Columbia and along some of the most beautiful trails in New Zealand, and I have to say, it's a great way to travel. Healthy, too. So the next time you're headed somewhere, consider renting some wheels and checking out the scene by bike. You won't regret it.