by Stephanie Crawford
Prev NEXT
5 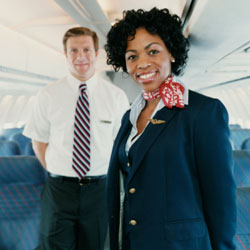 Federal regulations ensure that your flight crew is well-rested and ready to fly.
Digital Vision/Thinkstock

Crew delays mean flight delays. For example, if a flight crew member calls in sick, the airline has to scramble for a replacement at the last minute. Crew members might also be late arriving due to delays on their previous flights.

When flight delays are long, crew delays are even more likely, as crew members must stop working to comply with federal regulations. Those regulations require that memebers of a flight crew limit the lengths of their shifts and rest a minimum amount between them. For example, on a domestic flight, a single pilot can serve on a normal shift of eight hours in 24-hour period, and two pilots working together can work a 10-hour shift [source: e-CFR, 91.1059]. Each pilot must then rest at least eight consecutive hours before starting the next shift, and extended shifts require longer rest periods [source: FAA]. Flight attendants have similar shift restrictions [source: e-CFR, 91.1062].

If your flight has a delayed crew, there's a good chance you haven't yet boarded the plane. Whether in the building or on the tarmac, though, ask an airline representative to keep passengers informed about the status of the delay, including estimates of when the replacement crew will take over.