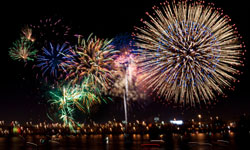 Where can you see the best fireworks displays?
©iStockphoto.com/ivanaster

Watching fireworks hit the night sky is always a delightful experience. Fourth of July is usually the best time to see fireworks in the United States, but don't forget you can also see them on New Year's Eve. And in some very magical places, you can even see them every single night.

You probably have childhood memories of sitting on a blanket, slapping at mosquitoes and watching the local fireworks display. But if you're a true fireworks aficionado, you should know where to find the most elaborate and biggest fireworks -- and the best places to watch them. Look up at the sky, put your hands over your ears and get ready for some awesome pyrotechnics.

In the Magic Kingdom, they don't need a reason to celebrate with fireworks. Every day is a reason for celebration, and Walt Disney World is famous for its nightly firework displays. The "Wishes Nighttime Spectacular" pyrotechnics show is a favorite among park visitors. Disney characters like Jiminy Cricket and Peter Pan tell a story along with fireworks and other special effects.

Tourists can see the display anywhere within the park, but if you want the best view, get a spot in front of Cinderella's Castle. There, you'll be able to see Tinkerbell fly through the sky. You certainly don't have to be a kid to enjoy this nightly flight of childhood fantasy.

Synthetic clothing can carry static electricity, which can ignite fireworks. People who manufacture fireworks wear cotton, all the way down to their underwear.

Nobody does Fourth of July quite like Boston. The fireworks display on the St. Charles River is one of the biggest in the nation. The show, which is synchronized with the Boston Pops orchestra, takes 11 days to prepare and lasts 21 minutes from start to finish. It requires more than 25,000 pounds of fireworks, hauled out onto the river via barges. Five miles of wires help synchronize the explosives with the music. Half a million people watch the show live on the banks of the river, and another 6 to 8 million watch the show on TV, according to Boston.com.

The best place to watch is from the Oval, which is the lawn area directly in front of the Boston Pops orchestra shell. People wait in line all day for the free -- but first-come, first-served -- event, in order to hear the orchestra and see the fireworks. 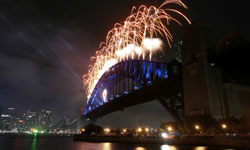 Sydney Harbour is breathtaking at any time of day or year, but it literally lights up on New Year's Eve. The midnight fireworks are preceded by family events, a smaller fireworks show and a Harbour of Light boat parade. Overlooking the iconic Sydney Opera House, the Sydney Harbour pyrotechnics are technically stunning. The display takes place over the Sydney Harbour Bridge, providing a spectacular backdrop to Australia's New Year's Eve celebration.

Each year, the fireworks are set to a theme of current and popular music. If you have the means, the best way to view the Sydney New Year's Eve fireworks is by boat. Several companies offer harbour cruise packages just for New Year's Eve. Also, the official Web site provides a map of the best vantage points around Sydney.

Philadelphia, one of the most historic cities in the United States, loves Fourth of July so much it celebrates with not one, not two, but three fireworks displays. Fireworks are preceded by parades, events and a concert.

The main Fourth of July fireworks are launched in front of the Philadelphia Museum of Art. The city recommends lawn-chair viewing from places like Lemon Hill, Benjamin Franklin Parkway, Boathouse Row, Kelly Drive, Martin Luther King Drive and Schuykill River Park. The other displays are held on the two Saturdays leading up to July 4th. These are held at the Great Plaza in Penn's Landing, which overlooks the Delaware River, the Benjamin Franklin Bridge and the Philadelphia skyline. Even if you can't get the best seats, you can still enjoy the show: The city broadcasts the music and display on screens located along the Benjamin Franklin Parkway.

The very first Fourth of July fireworks display was in 1776. Future President John Adams wrote about the day: "It ought to be solemnized with pomp and parade ... bonfires and illuminations [fireworks] from one end of this continent to the other, from this day forward forevermore."

Celebrating the start of the Chinese New Year, the Lunar New Year fireworks are held on the second day of the Lunar New Year over Victoria Harbour. A corporation called Jardine Matheson started the fireworks in 1982 to celebrate its own 150th anniversary, but decided to make it an annual event for the citizens of Hong Kong.

There are several good areas around the harbour for the best views of the fireworks -- including Tsim Sha Tsui, Mid-levels, Central District, Wan Chai, Causeway Bay and Hung Hom Bypass.

Year of the Rabbit

According to Chinese zodiac, 2011 is the year of the rabbit, and it began on Feb. 3, 2011. The new year marks the beginning of the Spring Festival in China.