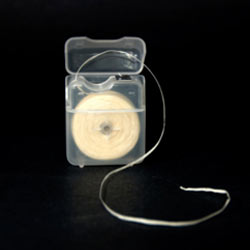 Dental floss can be used in a pinch as fishing line or even thread.
iStockphoto/Thinkstock

If you're like a lot of people, every time your dentist scolds you about not flossing regularly, you promise to be religious about it starting immediately -- that is, until you try it, get a mouth full of blood thanks to your aggravated gums and then remember why you ditched doing it in the first place. While we probably can't convince you to actually use the stuff on your teeth, carrying some dental floss around with you at all times can actually help save your life.

According to Robert Idsinga, a former Outward Bound instructor from British Columbia, Canada, who has done extensive mountaineering and ice and rock climbing, the same sturdiness that makes dental floss so painful on tender gums comes quite in handy in the wilderness. Among other uses, Idsinga says that instead of using floss to get food out of from between your teeth, it can actually be used to put necessary sustenance in your stomach. How? With a little bit of knowledge, floss can be turned into a snare for catching small animals or even as fishing line [source: Idsinga]. Floss can also be used to bind sticks or other items together for shelter from the elements [source: Oprah Winfrey Show]. There are other less obvious ways to utilize floss. "I also know that paraglider pilots carry dental floss so that if they get hung up in a tree they can lower it to someone on the ground and pull up the end of a rope so they can rappel down," Idsinga says. Anything not to floss.

Read on to discover the unlikely uses of a condom.