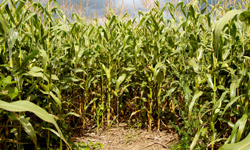 Dead ends are your enemy if you're racing to get out of a corn maze.
©iStockphoto.com/studio2f

Mazes date back as far as ancient Greece and are enjoyed all over the world today. There's something about these interactive pedestrian puzzles that really captures people's interest. It may have something to do with the challenge of finding your way through to the end of the maze -- the feeling of accomplishment that sets in with the completion of any puzzle or riddle. It's also a very sociable activity. Large groups of people can navigate these large mazes at once. In other parts of the world, mazes are made from shrubs, colored stones and hay bales, just to name a few materials. In the United States, mazes made from corn stalks are the most popular. Corn, or maize, makes for an ideal maze material. With its tall stalk and dense placement, participants find themselves trapped inside the silky confines. Fall is a popular time of year for pumpkin picking, hay rides and corn mazes, but some mazes are open year-round. Following is a list of five of the most amazing corn mazes.

Sever and Sharon Peterson first heard of mazes from a British exchange student in 1971. Sixteen years later, this Minnesota couple opened their first corn maze on Sever's Farm. Each year, the Petersons have a different theme for their maze, from Wild West to Egyptian. Fittingly, in 2009, the couple went with a White House theme, with 26 signs containing fun facts placed throughout the maze. There are also six pictures of Sever along the way that when logged, help you pinpoint your bearings. At the end of the maze, if you can fill in those spots on a map, you're entered into a drawing to win their weekly gas card giveaway. And for another twist, congressmen, senators and the president himself can get in for free. 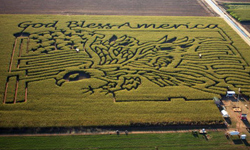 In 2002, the Fritzler farm celebrated America with its maze.
Kevin Moloney/Getty Images

Like many other corn mazes, the Fritzler maze in Greeley, Colo., is also a working farm. Corn mazes are a great way to get people out to the farm to buy produce and stroll through the pumpkin patch. Even though the Fitzlers have only been at it since 2000, they managed to construct the largest maze in Colorado. Since then, they've built mazes with themes ranging from tributes to NFL quarterbacks (John Elway) to country-western cowboy singers (Chris Le Doux). In 2008, owner Glen Fritzler paid tribute to his own parents, the aerial view revealing an incredible likeness of the pair. The maze covers more than 15 acres of ground and has two miles of walking paths. How long does it take to navigate a maze that large? About two hours. If you get lost, 10 stations around the maze will guide your way. If that doesn't work, employees are also peppered throughout to lend a hand.

In 1989, the Skellys didn't even grow corn as a crop. Fast forward about five years, when they realized that creating a family-fun destination was a great way to subsidize their farm efforts. The Skellys pride themselves on top-quality produce and a very challenging corn maze. In fact, this Wisconsin farm gives you two maze options -- one for the kids and one that's a little more difficult to navigate. The family maze is typically a fun theme, while the "Impossible Corn Maze" boasts a whopping three full miles (4.8 kilometers) of twisting, turning pathways contained on a seven acre plot. No kid-friendly themes or designs on this one, just a very challenging puzzle. 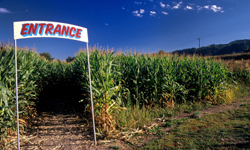 Most mazes have one way in and one way out. It's up to you find the exit.
©iStockphoto.com/blackestockphoto

In the heart of Pennsylvania Dutch country lays the Cherry Crest Adventure Farm. This New Jersey farming family has ratcheted up the fun meter, calling their venture an "agri-tainment" farm on their Web site. They lay claim to the "most dynamic and interactive" corn maze in the world. Judging from the aerial views of the mazes from years past, that description seems right on target. Some of the mazes have familiar themes, but the Cherry Crest mazes are a little more complex in their design. The reason why is because a former Broadway producer and co-owner of the American Maze Company heads up the design and construction. This 2.5-mile (4-kilometer), hour-long maze is filled with clues, random facts placed at stations, music and tunnel slides. There are also bird's-eye-view bridge lookouts so people can watch their family and friends get lost in the five-acre maze.

The Richardson family founded their farm way back in 1840, and three generations of family work there today. Over at the 450-acre (182-hectare) farm, the Richardsons grow traditional crops for Illinois -- corn and soybeans. They also grow more than 50,000 Christmas trees. In 2001, the family constructed what became the world's largest corn maze. Featured on the TV game show Jeopardy in 2009, the mammoth Richardson maze covers an astounding 28 acres (11.3 hectares), with 11.5 miles (18.5 kilometers) of walking paths. Since Illinois is the land of Lincoln, their 2009 maze pays tribute to the 16th President, with key points in his life depicted in the design.