Mount Rushmore Memorial: What to Know Before You Go 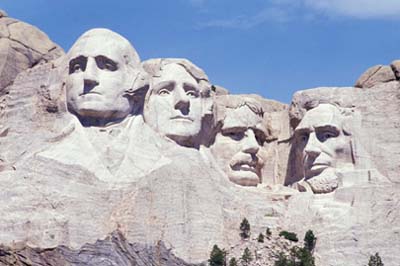 Mount Rushmore is a colossal memorial in the Black Hills of South Dakota. The work of gifted sculptor Gutzon Borglum, it was to become the world's largest mountain sculpture. The memorial started as an idea to draw sightseers to the Black Hills. In 1927, President Calvin Coolidge dedicated the site, and Borglum began 14 years of work designing, blasting, and carving the face of the mountain. Today, the 60 foot faces of Presidents George Washington, Thomas Jefferson, Theodore Roosevelt, and Abraham Lincoln gaze out from Mount Rushmore as a shrine to democracy.

The four presidents chosen for Mount Rushmore Memorial led the country from colonial times into the twentieth century. President Washington had commanded the Revolutionary Army and was the first U.S. president. Jefferson authored the Declaration of Independence and advocated westward expansion. Lincoln restored the Union and helped to end slavery in America. Roosevelt promoted conservationist and other progressive causes.

The magnitude of the sculpture on Mount Rushmore flabbergasts viewers. Washington's head is as tall as a six-story building. His nose alone is 20 feet long; his mouth, 18 feet wide. At this scale, Washington's full figure would stand 465 feet tall.

More than 80 percent of the work was done with dynamite, which quickly and inexpensively removed the enormous amount of hard rock that had to go. Borglum's crew grew so skilled that they could blast to within inches of Mount Rushmore's finished surface. After dynamiting, the workers bored a network of closely spaced holes, each reaching almost the depth of the finished surface. Then they used chisels to remove the surplus rock, and finally the employed pneumatic hammers to smooth the "skin" of each face on Mount Rushmore. It is thought that the hard ancient granite faces gracing Mount Rushmore will wear down at a rate of just one inch in every 10,000 years.

Doane Robinson, superintendent of the South Dakota Historical Society in the early twentieth century, wanted to have a massive stone carving to draw people to South Dakota. He talked about his idea with several people, but when he shared it with U.S. Senator Peter Norbeck things began to happen. Gutzon Borglum had been working on another memorial when he received a message from Norbeck. (Borglum was a student of French artist Auguste Rodin, and was one of America's most successful artists before he even thought about Mount Rushmore.) Borglum died in 1941, before the memorial was finished, but his son, Lincoln Borglum supervised the completion of his father's masterpiece.

Mount Rushmore can be viewed 24 hours a day, year-round, but it is best photographed in the morning light from the Main View Terrace. Easy trails lead to a visitor center, which has exhibits and a short film, and to the Sculptor's Studio, containing original carving tools and scale models of the memorial.