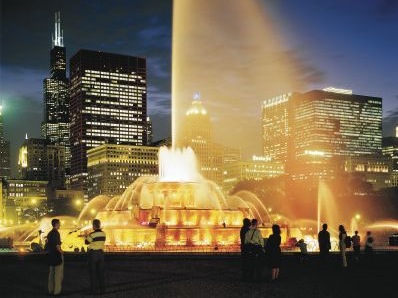 This 2,400-mile (3,862 kilometer) stretch of Americana, dubbed "the mother road" by writer John Steinbeck, is dotted with iconic saloons, motels and kitschy pit stops. In its heyday, Route 66 opened up a path to the Pacific for a nation of folks who must have felt landlocked. And businesses along its sidewalks flourished with tourism.

In the early 1920s, highway fever struck the United States. Enough citizens owned vehicles to warrant the construction of federal interstates, and when the national highway system was in its infancy, Oklahoma highway commissioner Cyrus Stevens Avery had a vision -- a superhigh­way linking Chicago and Los Angeles by way of small, rural towns. His dream-road, Route 66, opened in 1927 and was marketed as "The Main Street of America." The highway, paved in 1938, provided a scenic path across the nation -- it rolled through the Illinois prairies, the Ozarks, the foothills of the Rocky Mountains and the Grand Canyon and ended at Santa Monica Boulevard and Ocean Avenue in Santa Monica, Calif.

Though modern interstate highways have overshadowed Route 66 in recent decades and the road was formally decommissioned in 1985, it still attracts travelers thirsty for a swig of aged America. What vintage spots on Route 66 are worth a look-see? Let's find out.

The Santa Monica Pier is literally the end of the road, not only for Route 66, but for the contiguous United States as well. Within walking distance is the Georgian Hotel, a luxurious art deco hotel steeped in history since opening its doors in 1933. The hotel, which served as a speakeasy during Prohibition, has also been a hideaway for the famous and infamous. Clark Gable and Carole Lombard hid from the press at the Georgian, and you might find today's Hollywood royalty doing the same.

During the 1930s, Roy and Velma Crowl owned the cafe, motel, and service station that comprised most of Amboy, a tiny town on a desolate stretch of Route 66. Years later, Roy's daughter Betty and her husband, Buster Burris, took over the business and continued the tradition of caring for road-weary travelers. In fact, Buster was still changing tires for folks when he retired in 1995, well into his eighties. Today, the entire 690-acre town and all of its contents are owned by the Route 66 Museum in San Bernardino, California. The owners plan to restore the famous gas station, convenience store, diner, motel, and cottages to their 1950s-era charm.

In 1949, James Taylor (not the folksinger) converted a simple shack into one of the most popular souvenir shops along the Mother Road. To attract the growing throngs of tourists passing through town, Taylor painted dancing American Indians on the facade and lined the rooftop with 30 jackrabbits that appear to hop along the top of the building. Inside, he sold turquoise jewelry and southwestern souvenirs. And to ensure that the road weary noticed his shop among the many, he and another local retailer traveled from Arizona to Springfield, Missouri, and dotted more than 1,000 miles of roadside with billboards of jackrabbits and dancing cowgirls!

Frank Redford built the first of several Wigwam Village motels in 1934 near popular tourist spot Mammoth Cave in Kentucky. Two more opened out west by the mid-1950s -- one in Holbrook, Arizona, and one in Rialto, California. Each wigwam featured a guest room that was naturally suited to the southwestern stretch of Route 66. The Arizona, California, and Kentucky locations are still in business, with the marquee in front of the Holbrook location posing the question: "Have you slept in a wigwam lately?"

Tucumcari has a five-mile stretch of pure Route 66 nostalgia in the form of motels, diners, and curiosity shops. One neon sign after another tempts motorists to put on the brakes and kick around for a while. One of the famed shops is Tee Pee Curios Trading Post, which was built in the early 1940s as a gas station that sold groceries and novelty items. When the road was widened in the 1950s Tee Pee got rid of its gas pumps and focused solely on the fun stuff.

This indoor swimming pool opened in 1922, but by 1926 it had been purchased by J. D. Tucker, who converted it to a dance hall. Tucker covered the pool with a wooden dance floor and hosted flappers during the Roaring Twenties. Musical legends such as Tommy Dorsey, Louis Armstrong, Buddy Holly, and Roy Orbison came to play, and, at one time, it took a staff of 52 to serve the crowds.

It is said that several apparitions, including a ghostly couple, can be spotted dancing among today's dancers. In 1996, the Nat conducted an all-night "ghost-busting" of sorts. The cameras mysteriously turned themselves off, but a solo drummer and a female vocalist were recorded on audio. The Natatorium has been meticulously restored to reflect the whimsical roadway architecture of Route 66. It still hosts musical acts and is a popular entertainment venue, attracting artists such as the Dixie Chicks.

Artists and auto enthusiasts alike will appreciate the beauty of ten Cadillacs, buried halfway into the ground, nose first. Passersby are encouraged to add a personal touch by wildly decorating the vehicles, which span the model years 1949 to 1963. In fact, the cars are frequently painted over to create a fresh canvas for road-weary artists. Created in 1974 by the Ant Farm, a San Francisco art collective, Cadillac Ranch has become part of the nation's kitschy culture. The unusual attraction was the subject of a Bruce Springsteen song and was even depicted in the 2006 animated film Cars.

Lucille's is currently one of only two porch-style gas stations still operating on Oklahoma's portion of Route 66. Lucille Hamons and her husband bought the structure (originally built in 1927 and called the Provine Station) in 1941, and she operated it herself until she died in 2000. Lucille was known as "the Mother of the Mother Road" because of her many stories of the people who stopped by for a tank of gas or a snack.

What better place to stretch your legs on a road trip than at the park that boasts the world's largest totem pole? It's 90 feet tall, made of 200 carved pictures, and was sculpted by Ed Galloway between 1937 and 1948. He used 28 tons of cement, 6 tons of steel, and 100 tons of sand and rock to pay tribute to Native American culture. Galloway's creation was added to the National Register of Historic Places in 1999.

In 1949, when drive-in movies were as hot as buttered popcorn, the 66 Drive-In Theater was a new attraction. Along with most drive-in theaters across the country, it fell into disrepair until the Goodman family bought it and set out to return it to its former glory. They started work in 1996 and finished renovations in 1998. During the summer months, feature films are still shown under the stars. Today there are only around 800 drive-in theaters still operating in the United States out of about 5,000 that existed in the '50s and '60s.

Ted Drewe started selling frozen custard (his own concoction) in Florida in 1929. The ever-busy entrepreneur split his time between midwestern carnivals during the summer and Florida beaches in the winter, finally opening a permanent stand in St. Louis in 1931. In 1941, he opened another store in St. Louis along Route 66. Despite offers to franchise, the business has remained family-owned and operated. During the winter season -- a less appealing time to down a cup of frozen custard -- they sell Christmas trees.

Anyone who's ever been to a county fair has probably had a corn dog -- a breaded hot dog on a stick. While working at an army base in the early 1940s, Illinois native Ed Waldmire was toying with the idea of wrapping hot dogs in corn bread. Following the advice of a friend that the key was frying the meat in the batter, Waldmire started experimenting at the USO in Amarillo, Texas. Originally called crusty curs, Waldmire changed the name to cozy dogs and opened up his first stand in Springfield in 1946, after being discharged from the army. The Cozy Dog Drive-In continues to be a popular family-run business.

Located in Chicago's Grant Park, Buckingham Fountain is where Route 66 began. The fountain, which represents Lake Michigan, is adorned with sculptures of four sea horses that symbolize the states bordering the lake -- Illinois, Indiana, Michigan, and Wisconsin. The fountain's 134 jets shoot 14,000 gallons of water (per minute) 150 feet into the air for a magnificent display, which incorporates music and a light show in the evening.