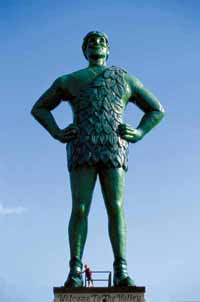 "Hey, hey, easy kids. Everybody in the car. Boat leaves in two minutes ... Or perhaps you don't want to see the second largest ball of twine on the face of the earth, which is only four short hours away?"

­This quote was delivered by Chevy Chase's character Clark Griswold in the 1983 family car-trip comedy "National Lampoon's Vacation." In the movie, the Griswold family treks across America in a station wagon called the "family truckster" to reach a theme park named Walley World. Walley World is fiction. But the ball of twine mentioned here by father Griswold isn't. In fact, there are two giant balls of twine you can visit while you road trip North America. One slightly smaller ball of twine sits in Cawker City, Kansas, and its larger cousin is on display in Darwin, Minn. But why would anybody roll an 11-foot (3.3-meter) ball of twine?

­It's a legitimate question. And it's not the first time you'll repeat, "But why?" inside your head as you read the following list of road trip tourist traps. What other "world's largests" and odd attractions exist out there on U.S. and Canadian back roads? Who built these wacky statues and sites and why do they lure vacationers?