by Sarah Alban
Prev NEXT
3 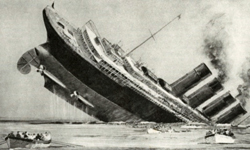 Despite warnings that the ship might be in danger if it left port, the Lusitania sailed and was torpedoed by a German submarine in 1915.
Photos.com/Getty Images/Thinkstock

The RMS Lusitania infamously sank off the coast of Ireland in 1915. A German U-boat had launched at least one torpedo at her hull, downing the ship in 18 minutes and drowning just more than 1,100 people on board. Those who died were largely passengers, about 120 of whom were American citizens. The Lusitania's sinking increased Americans' ill will toward Germany before entrance into the war in 1917.

But what was lost was more than just morale, lives and extremely advanced steamship equipment. The Lusitania, for most purposes, was a luxury cruise liner.

The ship contained two royal suites, on either side of the boat. Passengers staying there or in the first-class rooms enjoyed lavish facilities, including a top-notch dining area with extravagant menus for wartime, including French delicacies. A plush library and elaborately decorated lounges were available to upper-class passengers.

The downfall of the Lusitania hinged on its alleged alter ego as a cargo ship. In fact, the Lusitania was carrying tons of war munitions when it went down [source: Encyclopedia Britannica]. Both the captain and passengers had been aware of active German U-boats off the coast of Ireland on May 6 and 7, but all decided to go anyway. Captain William Thomas Turner received two warnings on May 7 before the ship took the torpedo blow [source: The Lusitania Resource].

The next landmark in Texas received little warning it was about to go underwater.