by Sarah Alban
Prev NEXT
4 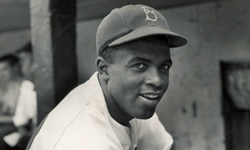 The Roosevelt Stadium is infamous for its role in the debut of Jackie Robinson as the first African-American to cross baseball's color barrier.

The minor-league baseball park was the historic site where Jackie Robinson smashed traditional prejudice by proving a black baseball player could hold his own with, and sometimes play better than white athletes. Robinson's minor-league game for the Montreal Royals against the Jersey City Giants was the first of its kind [source: Library of Congress].

The event was such a big deal the mayor required his employees to take the day off and buy tickets [source: Karnoutsos].

The stadium had originally been built as part of the New Deal, U.S. President Franklin D. Roosevelt's financial plan aimed at regenerating the economy in the 1930s. Members of FDR's Works Progress Association constructed the stadium, creating a minor-league ballpark that doubled as a boxing ring, hosting legends like Sugar Ray Robinson.

By the 1960s, focus shifted from baseball to rock and roll, and the stadium began hosting music legends, including the Beach Boys, Eric Clapton and the Grateful Dead, among many more.

But by 1985, according to New Jersey City University, the stadium had become structurally weakened by lightning and was costing the city more than the revenue it generated. That year, the building was demolished in order to make way for residential housing [source: Historic American Building Survey].

Our next destination would never be considered for residential housing; it was a cruise ship.