by Sarah Alban
Prev NEXT
6 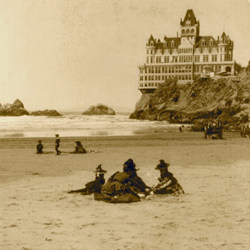 The Cliff House, seen here in 1898, has gone through several incarnations, two of which burned.
Buyenlarge/Getty Images

The Cliff House has seen at least three reincarnations of its original structure. Built originally in 1863 from the recycled lumber of a shipwreck, the Cliff House attracted a special crowd from the start. It didn't take long for presidents and wealthy businessmen to escape to the house with a view of Seal Rock.

An early renovation marked a declining reputation. Throughout the 1880s, the Cliff House was gradually seen as a meeting place for low-class visitors. Its reputation deteriorated, becoming a "scandalous" area [source: The Cliff House].

To combat the scandal, a wealthy San Francisco resident named Adolph Sutro bought the property and turned over management to a liquor company. The Cliff House began its resurgence as a clean, high-class restaurant and bath area. Unfortunately, in 1894, the shipwreck lumber succumbed to a fire.

Sutro rebuilt. The new house contained the infamous baths, a restaurant, a gallery, entertainment and private dining rooms. But Sutro rebuilt from wood, and in 1907, the building burned down again.

Sutro's daughter rebuilt with steel. Since then, the Cliff House has survived a massive earthquake. As of 2000, its scenic location on the iconic rock was drawing about 20,000 visitors a week [source: AllBusiness.com]. You can still see the autographed photos from celebrities who visited the original structures.

Nothing remains of the next destination, and no one knows exactly what happened to it.