by Sarah Alban
Prev NEXT
8 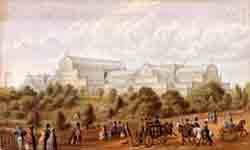 The Crystal Palace was magnificent in its day, but burned in 1936.
Photos.com/Getty Images/Thinkstock

Lots of people saw the Crystal Palace burn down in 1936, so many that magazine Illustrated London News expressed fears the glass towers would come crashing down onto spectators in the street. More than 500 firefighters rushed to the scene, breaking London fire records but ending with the palace in ruin.

After serving its purpose as the host building of the Great Exhibition in 1851, the Crystal Palace moved from Hyde Park to Sydenham Hill. Gentry had bought the place, saving it from an otherwise uncertain fate [source: Crystal Palace Museum].

Before and after its relocation, the palace attracted millions of tourists. More than six million visited during its initial six months of operation. First-hand accounts of train riders flocking to see the palace's Greek, Roman, Egyptian, Assyrian and other exhibits date back to 1856 [source: The Leisure Hour]. Visitors could even buy refreshments.

Outside, huge fountains shot water into the air, contributing to an elegant image. The chief designer, Sir Joseph Paxton, had been a gardener with minimal architectural experience. His designs, more aesthetic than easily constructed, drew skepticism from professional engineers.

Click to the next page to learn about a destination whose location isn't exactly known.