by Sarah Alban
Prev NEXT
1 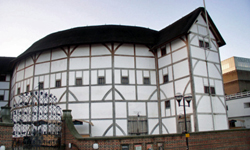 A reconstructed Globe Theatre will give you the opportunity to experience the works of Shakespeare and many others. The original Globe was dismantled around 1644.
iStockphoto/Thinkstock

The Globe Theatre famously served as the initial stage for many of William Shakespeare's plays, some famous, others forgettable. A few of the famous plays performed at the Globe included:

Shakespeare shared the limelight with a handful of other early 17th century playwrights, including John Fletcher, with whom Shakespeare is believed to have co-penned Henry VIII [source: Dawkins]. Infamously, during a production of Henry VIII in 1613, a cannon fired for theatrical effect set the roof of the Globe on fire and forced an impromptu evacuation, burning down the theater but taking no victims. The theater was rebuilt a year later to the day, but because of anti-theater politics at the time, the Globe was reportedly taken down in 1644 [source: Gurr].

A handful of theaters based on the original Globe have popped up, including permanent ones in London and Chicago. The replicas are based on a single drawing that survives from 1596 of the Swan Theatre, one of the Globe's three sister theaters in London. The drawing is the most accurate depiction of what Shakespeare's theater might have looked like [source: Shakespeare Resource Center].

For more on these famous locales and other related information, take a look at the links below.