10 Awesome Tree Houses You Can Stay In

by Mark Boyer
Prev NEXT
1 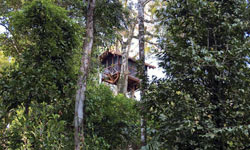 If you've ever spent much time in the rainforest, you know that the best place to sleep is in an elevated place, because snakes, insects and anything else that can bite you are on the forest floor. So there's really no better place to sleep than in a tree house. For a truly luxurious night in the treetops, the Canopy Tree House Suite at the Inkaterra Reserva Amazonica is perched 90 feet (27.43 meters) above the jungle floor, and it's just about the most deluxe lodging offered in the Peruvian rainforest. The tree house is accessed via a network of rope bridges, and a dedicated butler serves you meals on a private balcony. It sounds like the ideal place to kick back and do a little bird watching. Dinner and breakfast are included with the $300 per night rate, and guests are required to stay for a minimum of three nights [source: Hotel Chatter].

Author's Note: 10 Awesome Tree Houses You Can Stay In

I never had a tree fort when I was a kid, and I think that absence made me more drawn to tree houses as an adult. There's something special about being suspended in a tree while enjoying the comforts of home, and I think that's why people are so interested in these types of structures. If I could choose any of these tree houses to spend a night in, I think I'd go with the Green Magic Treehouse Resort in India, if only to test out the water lift in person.