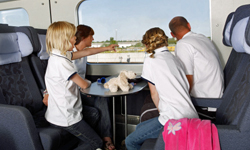 There's just something about traveling by train.
Ulrik Tofte/Lifesize/Thinkstock

There's something romantic about train travel. Perhaps it's the rhythm of the wheels on the rails. Or maybe it's the books, TV shows and movies that make train travel seem like so much fun. The truth is, trains can be an eco-friendly alternative to plane travel. In addition, train trips give you a chance to experience beautiful scenery while going from point A to point B. And you don't even have to take your shoes off at security to enjoy it.

Although train trips to any destination can be an idyllic mode of travel, some trips are special for the route they're on or the type of train making the trip. Maybe you'd like the chance to ride on the world's first bullet train, or experience a historic journey through the eyes of your favorite novelist.

Perhaps your tastes run toward the more adventurous. If so, you can ride on top of a train car zipping through the mountains in Ecuador, or experience a ride that's 3 miles (4.8 kilometers) above sea level while traveling from China to Tibet.

Whether you're in it for luxury, science, history or adventure, there's an incredible train ride for just about anyone.

You don't need to speak Japanese to ride the shinkansen. Track signs are in both English and Japanese, so you can navigate easily. If you want to study up before your trip, Japan Rail Pass has a list of useful phrases like "shiteiseki" for reserved seat and "yoyaku" for reservation that are worth jotting down before you set out.

Since you can ride the shinkansen throughout Japan, the various routes have different scenery. You can see forests, mountains, volcanoes, rivers and, of course, the ocean.

Bernina Express Through the Alps 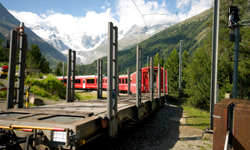 Taking the trip through Bernina offers a beautiful view of the Alps.
iStockphoto/Thinkstock

The Bernina Express is the last leg of the scenic Glacier Express through the Alps. It travels from Bernina, Switzerland, to Tirano, Italy, in 4.5 hours and includes spectacular views of mountains and glaciers.

Every car has a panoramic view, so it's not just first-class passengers that get the full experience. Through bridges, tunnels and switchbacks, the Bernina Express travels up and down steep slopes on the highest train tracks in the Alps. If you're feeling adventurous, you can head down to the open-air car to experience the views without any barriers.

Travelers can opt to enjoy Tirano's restaurants and vineyards at the end of the line. In the summer, you can also take a bus from Tirano to back to Switzerland and do some sightseeing or mountain biking in Lugano.

History and literature buffs will love the vintage sleeping cars on the luxury Venice Simplon Orient Express (VSOE). While this isn't the same train of Agatha Christie fame, the atmosphere definitely harkens back to that romantic time period.

It takes 24 hours to travel from London to Venice, and the VSOE boasts luxury travel through gorgeous scenery. Passengers enjoy gourmet meals and private sleeping cars that make the journey as memorable as the destination. As soon as the train pulls out of the station, the champagne bottles pop and you can lounge in the saloon's armchairs.

The train's cars, restored from 1920s, '30s and '50s railcars, still have that Art Deco style and many original features. Each restored car has its own story, so you might want to take the time to learn each carriage's history before setting out.

The original Orient Express first ran in 1883 from Paris to Bucharest. Probably best known for its starring role in Agatha Christie's "Murder on the Orient Express," this train went through several repairs and updates until its final run in December 2009. 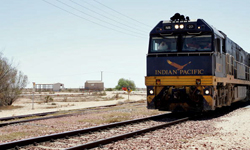 Australia's outback has a reputation as a tough but beautiful place. There's a lot to see, if you're up for the trip. But if a safari into the outback isn't for you, you can still see the sights without needing a compass and a map. The India Pacific is a three-night train journey from Australia's east to west coasts. The 2,700-mile (4,375-kilometer) trip takes you through the continent's wild interior, where you can view the outback from the comfort of a train car.

The trip starts in Sydney on the east coast through the southern part of Australia to Perth on the Indian Ocean. The route travels through the Blue Mountains, visits coastal and outback towns, and even offers chances for travelers to disembark, do some sightseeing and meet a few locals along the way.

The Coast Starlight from Los Angeles to Seattle 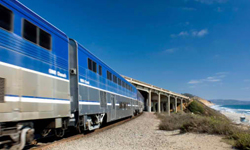 A train trip up the Pacific coast can be a beautiful way to see the West.
iStockphoto/Thinkstock

Maybe you want to see the west coast of the United States, but aren't interested in driving the whole way. Instead of focusing on the road, you can soak in the views on the Coast Starlight.

This Amtrak train departs every day on the 35-hour trip from Los Angeles to Seattle, stopping in towns along the way. The 1,377-mile (2,216-kilometer) trip skirts Pacific beaches, the Cascade Mountains, Mount Shasta and beautiful parks. You'll pass through San Francisco, Sacramento, Calif., and Portland, Ore., on your way up the coast.

If you're traveling with kids, you can send them to the Arcade Room to play some video games while you enjoy the daily local wine and cheese tasting. Like on many of Amtrak trains, the Coast Starlight has free WiFi in the first-class Parlour Car.

The Blue Train in South Africa 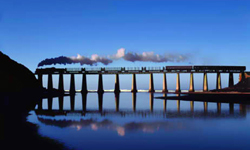 A train trip could be a great way to see the South African countryside.
iStockphoto/Thinkstock

Yet another train ride for Agatha Christie fans, South Africa's Blue Train is the picture of luxury. The setting for Christie's Poirot thriller, "Mystery of the Blue Train," it won awards as the World's Leading Luxury Train in 2003 and 2009.

Running from Cape Town to Pretoria and to Durban, the Blue Train gives tourists a chance to explore South Africa in style. Its suites have televisions for riders to watch movies or watch the journey from the driver's perspective on the "driver's-eye-view camera." Rooms all have private bathrooms with a tub or shower and sub-floor heating.

Common areas are equally posh. The lounge car offers comfortable seating and features panoramic windows. If you want a cigar or a drink, you can head over to the club car and play a hand of cards while enjoying the passing scenery through the windows.

The Cape Town-Pretoria line is a 27-hour trip with a different stop in each direction. When departing from Pretoria, the train stops in Kimberly, an old mining town, and passengers can visit the museum there and take a tram right into an old diamond mine. On the way back north from Cape Town, the train stops in Matjiesfontein, where you can grab a drink and enjoy the colonial-style architecture.

VIA Rail's Canadian from Toronto to Vancouver 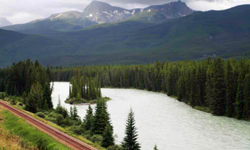 Canadian rail travelers can catch a glimpse of some beautiful views, like this one in Banff National Park.
iStockphoto/Thinkstock

Much like Amtrak in the United States, VIA Rail combined the major train companies in Canada when they were in financial trouble in the 1970s. The Canadian, which traverses most of the Canadian continent, still uses the original rail cars from back in the 1950s, with a few updates.

The Toronto-Vancouver line stops in Winnipeg, Edmonton and Jasper. Depending on the ticket or package, travelers can hop off in different towns for side excursions. If you're looking to travel on a budget, you can pick up an economy-class ticket and travel straight through. Spendier riders might look into the eight-night package, which includes sightseeing in Jasper, a trolley tour in Vancouver, and a visit to Victoria's Butchart Gardens.

No matter what sort of ticket you get, the scenery alone is worth the trip. Canada's landscape is breathtaking. You'll pass mountains, prairies, the Great Lakes and beautiful wilderness. 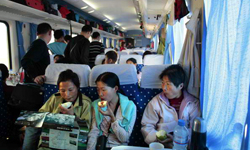 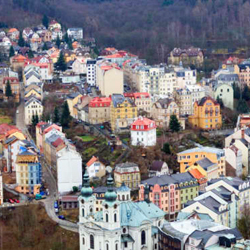 Start your Ecuadoran excursion in Quito, where you can board one of the most unusual trains on our list.
Hemera/Thinkstock

With cars modeled after the traditional, festive South American bus, the Chiva Express is an exciting ride through the Andes and down to Ecuador's coast. The train takes a number of routes, but the four-day Quito-Cuenca route combines a train trip with bus excursions so you can experience Ecuador's landscape, food and culture up close.

This train trip includes a full day in Cuenca, where you can shop, visit museums and enjoy the architecture. All meals are provided, and instead of sleeping on the train, the trip includes hotel accommodations for each of the three nights.

The most exciting part of the trip has to be the train itself. Not only does it resemble a bus, but as the train twists through the majestic "Avenue of the Volcanoes," the Andes mountains and the Santa Anna Valley, you can take in the sights while riding on the roof. 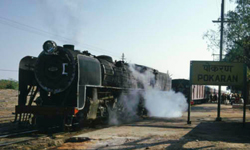 India relies on trains for transportation of both people and goods.
iStockphoto/Thinkstock

Whenever passengers enter or exit the train, the Maharajas' Express literally rolls out the red carpet. The staff on the train wears traditional Indian dress complete with turbans. The carriages feature rich details, and the train's passenger cabins all have individual air conditioning, TVs, DVD players and Internet access.

Passengers on this eight-day train trip get the royal treatment. It stops often for tours and museum visits, and you even get to share meals and high tea with different maharajas. During a stop in Jaipur, you get to play polo while riding on an elephant's back. Later in the trip, there's a planned photo opportunity with a tiger. Of course, no royal tour of India would be complete without a visit to the Taj Majal.

For more about riding the rails and other topics, make an excursion over to the next page.